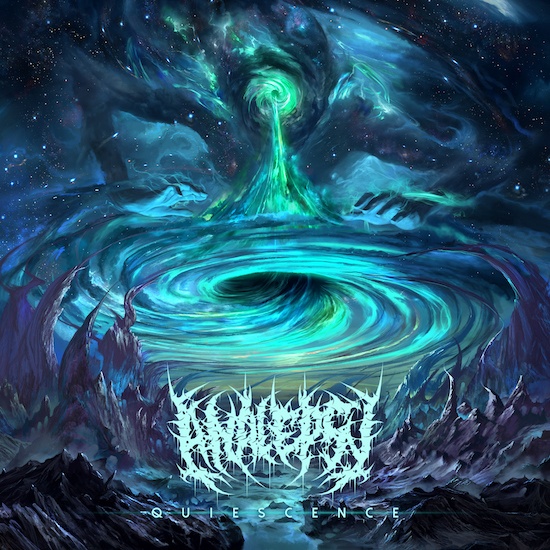 At a time when avid metal listeners are beginning to turn the page on what seized their attention in 2022, and to look ahead to what’s coming in the New Year, we have one more vivid reminder of just how great 2022 was for extreme metal, thanks to a tremendously good video for a tremendously good song by the Portuguese death metal band Analepsy.

The song that’s the subject of the video, “Edge of Chaos“, is the penultimate track on Analepsy‘s powerhouse second album Quiescence, which was jointly released this past spring by Agonia Records, Miasma Records, and Vomit Your Shirt Records. It was a great choice for the video because it’s convincing proof that trying to sum up Analepsy‘s songcraft as brutal or slamming death metal leaves a lot un-said, and what those labels fail to capture is part of what makes Quiescence stand out from the pack. 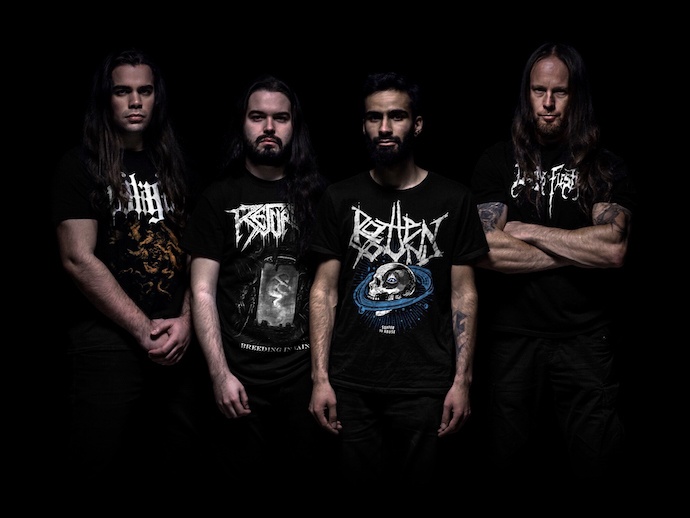 To be sure, Analepsy are capable of inflicting stunning levels of brute-force audio destruction, but the dynamism of their songwriting and their use of melody to conjure strange and splendid visions create other memorable dimensions to the listening experience. “Edge of Chaos” is a captivating example of that.

The first 1:40 of the song makes for an extremely gripping introductory movement… gripping as in, it will put your head in a hammer lock. Ominous and eerie, and punctuated by tremolo’d guitar spasms, it also strikes with bridge-collapsing force. The tom drums boom like cannonades. The kick-drum and the the bass sound like bombs going off.

After that grim and brutal opening the percussive cannonades and megaton detonations don’t stop, but the music becomes an order of magnitude more malicious and frightening. The riffing is both jittery and jackhammering. Those tremolo-picked convulsions sound like screaming, and the chords moan in agony. Pick squeals go off like abbreviated sirens. Gruesome gutturals, cold as ice, growl the words.

The impact of all that is physically convulsive and mentally unnerving, but there’s still more to come, including a big dose of shred… thanks to shrill, swirling, and fast-twitch guitar solos that sound supernaturally delirious and send the song to even greater heights of pulse-pounding exhilaration.

But it’s not only the song that makes what we’re bringing you today such a riveting experience. The video, directed by Joël Martins (Titanforged Productions), is beautifully lit and expertly filmed, and turns out to be just as gripping to watch as the music is to hear.

And so, as the year quickly draws to a close, it’s still worth remembering releases like Quiescence, or discovering them for the first time. And if you like what you hear, you can pick up the album in a variety of formats (vinyl, CD, tape, and digital) via the links below. Credit for the recording, mixing, and mastering goes to Demigod Recordings, and credit for the cover art goes to Pedro Sena – Lordigan.

No Responses to “AN NCS VIDEO PREMIERE: ANALEPSY — “EDGE OF CHAOS””