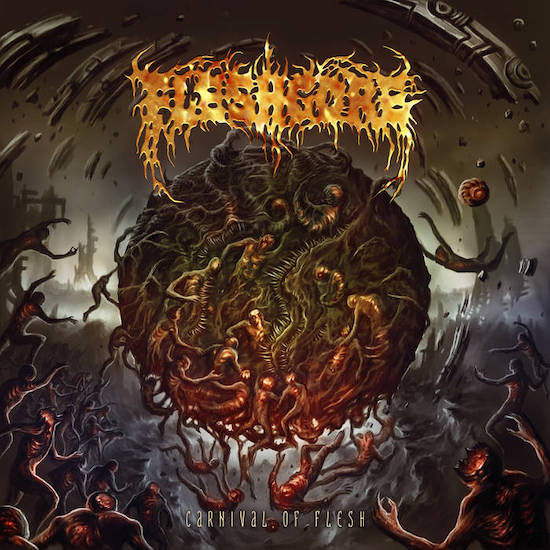 (The Ukrainian band FLESHGORE hurled us toward the end of a miserable 2022 in a rampage, and DGR says hello to 2023 with a review of this brutal monster in our first post of the new year.)

If nothing else, FLESHGORE are brave for multiple reasons given the state of the world. One of them being that they are brave enough to unleash an album on December 20th, right in the midst of the year-end list season and into the lead-up to void week where nothing happens on account of the holidays, unless you live in a war zone.

I’ve often joked around here that the subjects of today’s writeup must have their name always written in ALL CAPITAL letters. The sort of rock-crushing brutal stupidity that powers their world of death metal is the type in which caveman grunting is the norm, and honestly, having a name that consists of nine letters may be a little bit intense for the type of person this music embodies. That’s why you’ve often seen us joking that their name is always going to be FLESHGORE around here.

Of course, you don’t get to be that way without having struck upon a vein of brutal death metal so pure that you could be considered a lighthouse of the genre, as if anyone hunting for what the world of brutal death metal was up to these days need look no further than the mighty FLESHGORE. 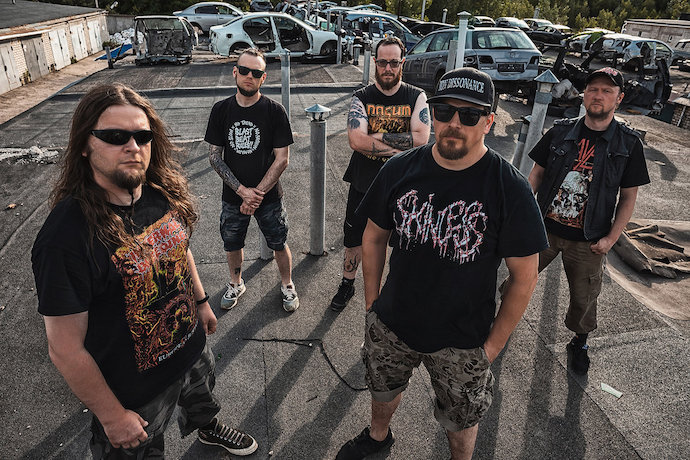 We really picked up on the group around the time of their 2017 release Denial Of The Scriptures and found it to be a generally solid album, full of the sort of viscera splattering against walls style of vocals that you’d come to expect from the genre, about as straight shooting as you could get with a tiny bit of sarcasm and a hell of a jam in the song “Talk To Me About God”.

Fleshgore – we’ll keep it standard for your eyes’ sake – would release an EP called Godless in 2018 but afterward would go radio-silent as the group reformed and recharged post the usual touring activities. Until December of 2022, which saw that release of their newest full length Carnival of Flesh – a five year plus gap between them – their first with Italian vocalist Michele Borniotto as part of the lineup, at the bare minimum guaranteeing a forty-minute escapade of dual vocal attack shenanigans alongside the bludgeoning contained therein.

Carnival Of Flesh has an interesting dynamic to it because there is a sort of push-pull to the differing philosophies of brutal death metal taking place within Fleshgore‘s songwriting this go around. There’s the tendency to go for the hyper-complicated, fast-moving, and shredded to near unintelligibility guitar riff that sounds like sewage by sheer nature of the wall of sound coming at you at once. And then there’s the other side of the spectrum where the guitar-lines are so percussive that sometimes it feels like the drummer may be the most important writer of the song. The term brain-dead chugging doesn’t even come close; the guitar becomes a weapon or a cudgel of its own and it is being used to hit things. The whole rhythm section is so focused on a downward motion that the overall sense is that the music is just one creature stomping around and leaving holes that could swallow houses behind it.

The opening song of Carnival Of Flesh, “Distorted Lights” is one of those. A rattle-can of a song filled with one overriding rhythm that quickly becomes the only impression of it by the time “Distorted Lights” wraps up. With both vocalists at work, “Distorted Lights” is your slam-dancing song of the album and it’s an interesting starting point since it is so far on the aforementioned caveman throwing things into a wall side of the spectrum that it almost seems like Fleshgore were just going to make an album about destroying the floor beneath them. 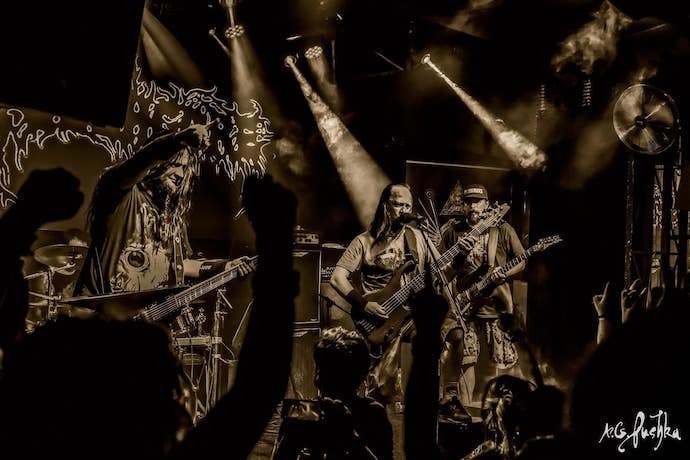 Carnival Of Flesh isn’t just that though, given that the song that follows it is the titular “Carnival Of Flesh”, which compresses the runtime down from its predecessor’s five and a half minutes to just a handful of seconds over three and cranks the tempo up massively. Remember when it was mentioned that the other style of this is the high-speed wall of sound that all seems to crash into you at once, no matter what sequence of notes that plays? That’s “Carnival Of Flesh” in a nutshell, infused with a more manic brutal death metal energy that allows long time bassist/vocalist Ruslan Drozd to roar over the whole affair in a way that strongly calls to mind the days of Denial Of The Scriptures.

Fleshgore know where their bread is buttered with that song and there’s a decent spread throughout the album that’s of a similar vein. With the first two songs of the album establishing the basic walls that songs will bounce between, the rest of the album positions itself within those lines rather comfortably, boiling down to every song either being an outright assault on the senses or a hardcore-tinged chugfest that could be enshrined in the halls of mosh-pit anthems. There is zero pretense on this one, it’s the red-meat genre fare that you would come to this style of music for – as if an album where the cover art is a giant cthulu orb of bodies and tentacles could ever sound like anything else.

In the pile of blood and guts there are still some absolute killers to be found though, and chief among them would be the three songs “Hive Of Insanity”, “Frail Utopia”, and closer “Ad Astra”. “Hive Of Insanity” is one of the previously mentioned tracks that runs in a similar vein to the titular “Carnival Of Flesh”. It’s a musical windstorm launched from space. The title is fitting given that the music within rocks between the brutally heavy slow movements and the quicker death metal blastfest.

“Hive Of Insanity” shares quite a bit with the other two listed here as well, chief among them being that there isn’t a starting point for the song. It’s just acceleration from go, the sort of thing you might expect out of a European super car but placed within the hands of individuals for whom a 15mm wrench is just another weapon to throw at someone. “Frail Utopia” is actually a little more girndcore oriented – which was something of a surprise – though that might partially be accidental given that the song erupts outwards from the start much in the same way that genre does. When the whole band roar through the song it has the air of equal parts madness and musical tantrum that grind often prescribes. It is also the album’s shortest song, so you can see where the constant velocity lends itself to that feeling.

“Ad Astra” on the other hand wins out a bit just due to the fact that the band jammed a guitar solo in on top of an already bludgeoning track. You’re listening to the song, already with the sense that Fleshgore have been throwing everything they possibly can at you and then there’s this guitar solo verging on madness with how it barely seems to be hanging on, just to catch you off guard right before the song ends. Carnival Of Flesh opens on some of the most blatantly-simple rock crushing rhythm blocks out there and closes on a guitar solo that could qualify as a work hazard. 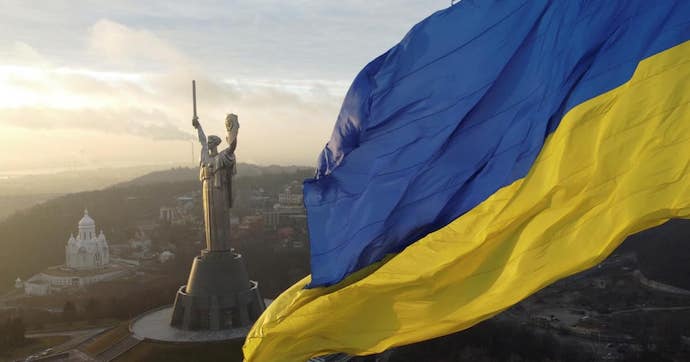 Carnival Of Flesh is an album that allows a band like Fleshgore to continue permitting goofballs like yours truly to bold and capitalize their name all the time and make it feel well earned. You don’t get to be FLESHGORE if you’re not going to put out albums worthy of the name itself. They’ve become a bellweather of the genre and continue to hone in on an already ruthless formula.

A little more raw than the storm that was Denial Of The Scriptures but just as violent as anything they’ve done before. There’s just as many head-spinners as there are head-crushers within Carnival Of Flesh, its near-forty minutes of relentless attack done by a crew that have long etched their name into the rocks of the genre. The brutal death crews out there should be more than happy with Fleshgore‘s latest offering of offal to salivate upon.