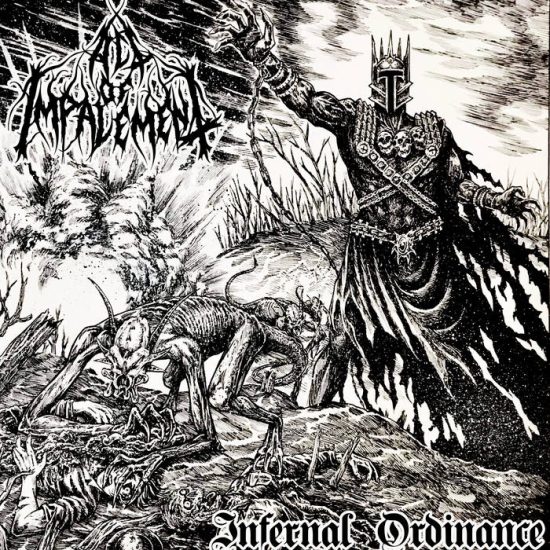 If you had managed to catch Act of Impalement‘s 2018 debut album Perdition Cult, you’d know that this Nashville trio could have gone in many different directions with a follow-up full-length. They pulled from a lot of different heavy and extreme genres and succeeded in keeping listeners perpetually off-balnace. As one especially vivid review put it, they proved themselves capable of “churn[ing] out vile heaps of grinding crust one minute and the next cough[ing] up a doomy, death metal cyst of drudgery,” creating an experience where “sodden waves of sludging doom marry up with guttural death metal nuances before a sudden tide of black-cum-death thrashing interrupts”.

There were so many highlights on that first album, so many hideous thrills and chills, that it wouldn’t have been the worst thing in the world for this hydra-headed world-ender of a band to just do it again, giving fans another discombobulating tour through a hideous netherworld labyrinth of sound. But the second album that is now about to emerge after a five-year hiatus gives us a different plan, no less thrilling and chilling but more focused in its monstrosity. And oh hell yes, that second album Infernal Ordinance is a monster. 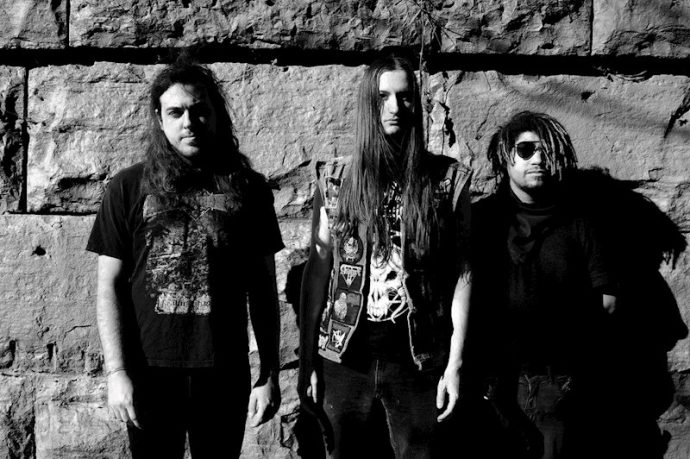 The first single from the new album, “Summoning the Final Conflagration“, is true to its name. With a cymbal countdown and an opening dose of foulness and frenzy, the song ignites in a convulsion of maniacal drumwork and screaming and gutting riffage tuned to a corrosive level of distortion — and then it transforms into an ugly lurching stomp just in time for gargantuan growls to enter the fray.

The pace occasionally slows, making the song even more massively hulking and imperious, and also even more drenched in agony, and horrific screams erupt. Near the end, a mutated guitar solo ruthlessly scrambles brains before the band bring back one last skull-beater groove and a final dose of brazen, abrading chords.

The music is all at once primal and ruthlessly punishing, weird and unearthly, hopeless and harrowing, and something like a fanfare for the emergence of some grotesque eminence of titanic proportions.

The song we’re presenting today, “Atomic Hecatomb“, has an equally startling start, and then starts jabbing and jumping, with the guitar and bass yowling and growling. Of course, the tonal quality of this sprightly romp is still gruesomely encrusted in filth, and its jackhammering groove is even more likely to get heads pumping than the first single. Here again, the soloing is both spectral and delirious, and the vocals are horrid.

The band also switch things up before the end, converting the song into a crusty death/punk romp before resuming the task of beating listeners into broken-toothed submission. The song also proves how well-named the album is, demonstrating that Act of Impalement do indeed have an arsenal of infernal ordinance at their disposal.

Infernal Ordinance is an exhilarating 29-minute torture chamber, set for a February 2 release by Caligari Records, on CD, cassette tape, and digital formats. The album was recorded and mixed by Yautja‘s Shibby Poole, and the mastering was done by Will Killingsworth at Dead Air Studios. Credit for the cover art goes to Diablo Macabre.

No Responses to “AN NCS PREMIERE: ACT OF IMPALEMENT — “ATOMIC HECATOMB””