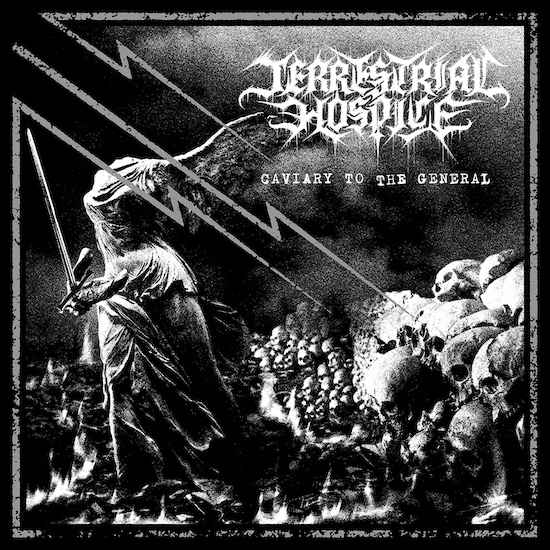 The forthcoming second album by the Polish duo Terrestrial Hospice is named Caviary to the General. Don’t let your eyes pass over that name too quickly, or you might think it reads “Cavalry” or maybe “Calvary”, or maybe that was just us. The actual name sent us scurrying to a dictionary, which revealed that “caviary” is a place for keeping or raising cavies — which turns out to be a family of rodents native to South America and includes the domestic guinea pig, wild cavies, and the largest living rodent, the capybara.

Well, it’s an intriguing title, the meaning of which we can only guess at. The title of the band’s first album, Indian Summer Brought Mushroom Clouds, was also one you don’t soon forget, and the sonic holocaust that album presented (which we commented about here) wasn’t the kind of thing that passed quickly from memory either. It was such a wild and extravagantly savage black metal riot that it was a bit scary to read that the new album is “arguably even more extreme“.

Is it? Well, you’ll have a chance to think about that yourself (once you reassemble your mind) because today we’re premiering a song from it named “Memoir“, and reprising a previously released song named “In the Streams of Phlegethon“, in advance of the record’s February 10 uncaging by Ancient Dead Productions. 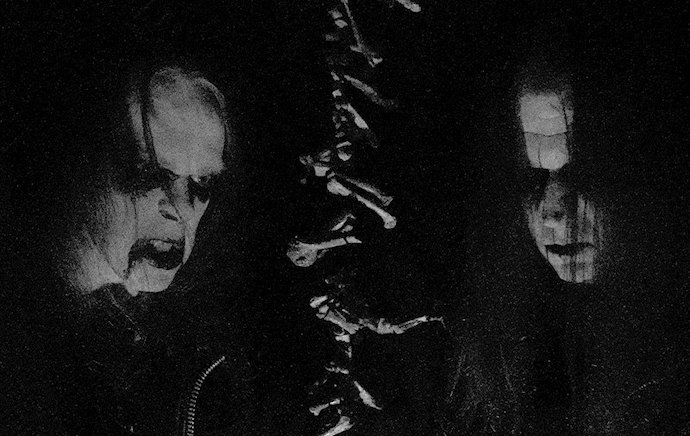 If you don’t know, the pair who make up Terrestrial Hospice are very well experienced. They consist of drummer Inferno, the long-running percussionist for Behemoth and Azarath, and more recently both drummer and guitarist for Witchmaster, and vocalist, guitarist, and bassist Skyggen, who also has a deep resume that stretches back to the mid-’90s.

With that wonderfully named first album they made a relatively swift 37-minute assault, but they’ve expanded their campaign on the new one, climbing close to 46 minutes with two more numbers on the track list. Perhaps needless to say, this results in more killing power, but more variety as well.

Consider “Memoir“: On the one hand, it’s a whirling and racing romp of unchained violence and ecstasy. The drums hurtle and boom at blazing speed. The dense and dirty riffing spins and scathes like a vortex of acid and fire, and slashes with cruel intent. The bass sounds like a superheated pulse. The lead guitar writhes and screams. And the vocals are utterly scalding in their unchained ferocity.

On the other hand, the drums tumble and bounce, and the riffs seem to dance in a kind of grim delirium, creating a harmony of mauling and madness. Somehow, the experience isn’t just exhilarating, it’s also catchy.

Now consider “In the Streams of Phlegethon“. More mid-paced in its momentum than today’s new track, it’s also more eerie and sinister. To be sure, there’s madness in the lead guitar’s quivering trill, and the both the riffing and the double-kicks do come to a boil, while the vocals are terrorizing, but the skipping drum beats and mercurial fretwork create an unsettling infernal aura.

Yet with no warning, the song convulses in a spasm of hyper-blasting drums and blazing and brazen chord that takes the breath away. There’s a kind of hideous grandeur in that experience, even as it’s trying to skin you alive.

So now you have a taste of the songwriting dynamism we referred to earlier, and a sense of the music’s altering moods. And of course it must be said that Terrestrial Hospice haven’t pulled back at all from their tendency to inflict mind-warping audio violence.

Caviary to the General will be released by Ancient Dead Productions on CD and cassette tape formats, which feature cover artwork by Mentalporn. Place your orders now!