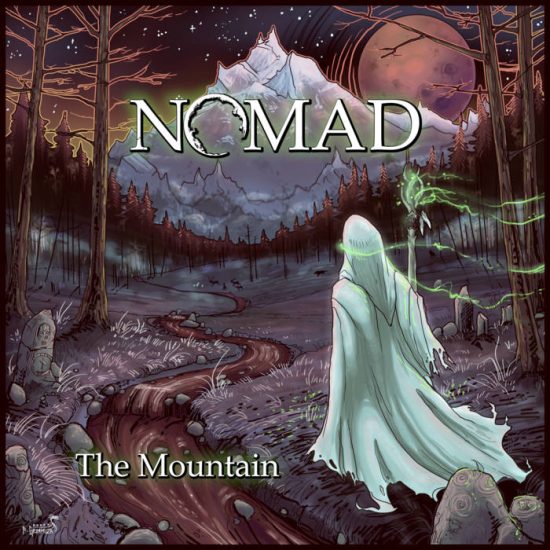 Straight outta British Columbia’s Okanagan Valley comes the death metal band Nomad and their debut album The Mountain, which is home to songs that are both heavy-grooved and technically adventurous, both fiendishly melodic and strikingly savage, and with a wide-ranging vocal interplay that features three different performers.

As a vivid sign of what Nomad have done with The Mountain, we’re going right to an electrifying and politically charged new song named “Revolution”. 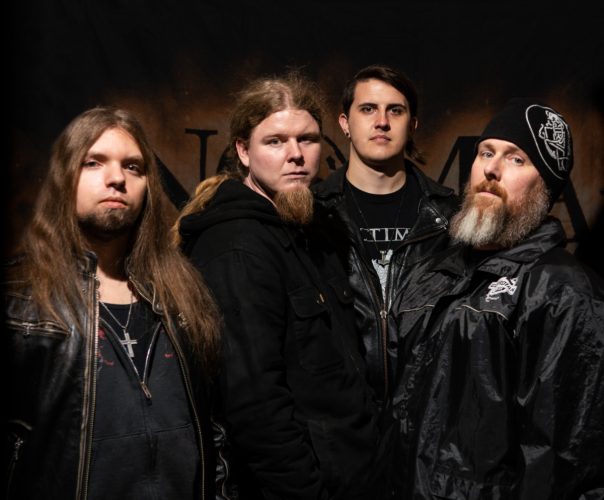 “Revolution” takes no time at all to seize attention. The drums clatter and boom with immediately thrilling effect, and around those convulsive strikes the guitars slowly meander and ring in a beguiling harmony. The vocals have their own interesting harmony but flare into rabid, throat-cutting growls. That slithering opening melody, warmed by the bass, reappears and becomes a swelling ear-worm — but with a pause the song transforms into a hulking and jolting brute.

The guitars jitter and whine, and the vocals change into goblin-like snarls, creating a feeling of sinister menace, which becomes even more sinister thanks to an exotically swaying and swirling guitar solo whose piercing tones are somehow inviting as well as increasingly crazed. Maniac howls, ugly gurgling expulsions, and berserk screams vent the lyrics with their own groove, while the band as a whole continue on with their nasty but highly headbangable beating.

Nomad shared these thoughts about the song:

“The first half is our “ballad” with clean vocals, and the second half is rocking out to one hell of a sludge/groove riff, start light, go heavy, it’s kind of our “One”. The lyrics call for a revolution, a societal change, redistribution of wealth, symbiosis with nature, and to stop messing up the damn planet so our kids have a decent world to live in. The album title comes from the final line of the song, and the “fuck you” is directed to those that put profits over the preservation of our planet.”

“Revolution” is the second single disclosed from the album so far. We’re also reprising a stream of the first one — “Burning Alive” — which, as the title implies, is even more hard-charging and wild. Heavy-grooved and hard-hitting, the song is also more darting and deranged in its riffing and even more unhinged in its brazen, multi-toned vocal tirades — and at times it sounds like bombs going off in the midst of the jackhammering trauma. The thing is also damned addictive. See for yourselves:

The Mountain is set for release on March 3rd and comes recommended for fans of Lamb of God, Pantera, and Sepultura. It was mixed by Bretton Melanson and mastered by Christian Donaldson (Cryptopsy), and it features eye-catching cover art by Angela Grimmuza. It’s up for pre-order now, on CD and digital formats:

No Responses to “AN NCS PREMIERE: NOMAD — “REVOLUTION””