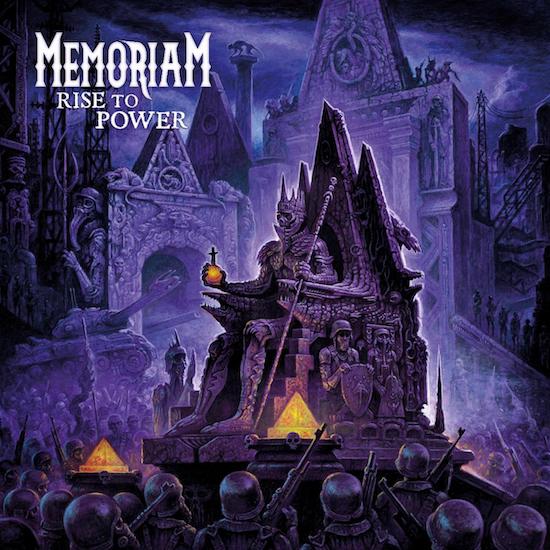 (Here’s Todd Manning‘s review of the new album by the UK’s Memoriam, which is set for release by Reaper Entertainment on February 3rd and features stunning cover art by Dan Seagrave.)

Old School Death Metal is more vital than ever, with both old fans and new initiates alike being drawn into the crypts searching for their next fix. While many of the original bands continue to put out new records, other scene veterans form new groups in order to develop the genre’s sound even further.

Such is the case with the British act Memoriam. Formed by Karl Willetts, vocalist of Bolt Thrower, and bassist Frank Healy of Benediction, and joined by guitarist Scott Fairfax and drummer Spikey T. Smith, Memoriam draws on the blueprint of those seminal acts and adds a number of new elements to the sound. Their latest album, Rise to Power, forms the second section of a trilogy that began with 2021’s To the End. 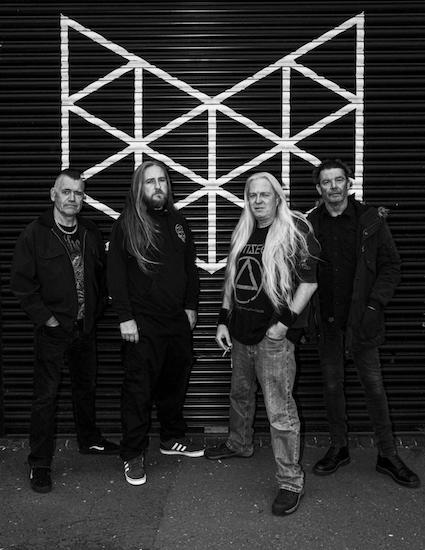 The album opener “Never Forget, Never Again (6 Million Dead)”, lays the foundation for the album that follows. The song begins with a crash of harmonized guitars creating an epic feel. But this short introduction quickly gives way to a heavy mid-paced riff that splits the difference between Bolt Thrower and Obituary. The song isn’t terribly complex but it’s designed to give any death metalhead all that they seek.

While the opener sets the tone, Memoriam is far from a one-trick pony. Each song feels vast but in a different way from the songs that preceded it. “Total War” kicks off with an almost Meshuggah-style riff before hitting on a sweeping bit of Bolt Thrower doom. “I Am the Enemy” delves into death-doom territory, bringing to mind the likes of My Dying Bride or Paradise Lost. Especially compelling are the fourth and fifth songs, “The Conflict is Within” and “Annihilations Dawn”, respectively. The former incorporates uptempo rock beats and melodic guitar figures into its architecture while the latter sports a bridge that nods at least a little towards post-punk. Willetts demonstrates excellent control over his vocals, not allowing his growl to work against the atmosphere of this more nuanced passage.

The album closes with the appropriately grand piece “This Pain”. An acoustic guitar leads the listener into the song proper. While this won’t be mistaken for anything other than death metal, Memoriam hints at the more melodic end of the black metal spectrum, and at other times they evoke the majesty of the Peaceville 3’s brand of death doom.

Memoriam could have easily rested on their past accomplishments and given us another old-school death metal record, and who would’ve complained? Not me. But instead, their ambitions pushed them to create an album full of nuance and atmosphere, which also happens to still be pretty brutal. Rise to Power does not lack headbanging moments — in fact, each song is full of them. But the devil is in the glorious details. After everyone’s done banging their heads and throwing the horns to this, they’ll be stuck with tons of memorable moments long after their necks have recovered.