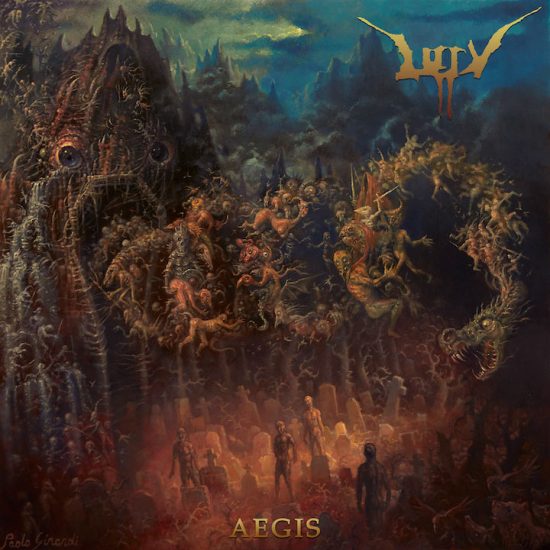 Paolo Girardi somehow managed to reach new heights of horror when he painted the cover art for Lurk‘s new album Aegis. With astonishing detail he created a nightmare vision of a dragon made of macabre creatures emerging from the maw of an equally hideous monster (from which a waterfall of wraiths and demons descends), swooping down toward a graveyard of risen dead.

It’s a fitting presentation for an album that is itself an experience in dread and revulsion, panic and despondency, one that creates harrowing otherworldly visions and inflicts immense traumatizing brutality. Paradoxically, Lurk also succeed in making their blood-freezing and bone-smashing musical excursions spellbinding. They describe their own conceptions this way:

“Aegis embodies the power of discord feeding the individual. The songs roll out in sporadic forms of different persons, under the guidance of furor and perseverance. Those stem from all things which are against divinity. No void too deep or mind too obscure, no action too human.”

The album is still fairly far away, with a release date of April 7th set by Transcending Obscurity Records, but there are already tangible reasons to get greedy for it, with a couple of songs already sprung from the crypt and one more we’re presenting today. This new one is named “The Blooming“. 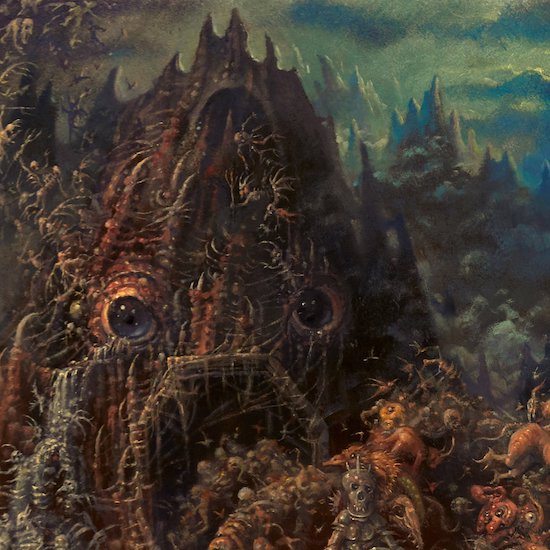 What blooms within “The Blooming“? It’s tempting to say that terror flourishes here, because Lurk‘s music is simultaneously frightening and cruel, administering punishment with visceral might and carving sanity as if a malign force has emerged from a nightmare realm, leaving anguish and hopelessness in its wake. And yet somehow the band make these terrors enthralling, casting a hideous spell as they go.

The whir of the song’s opening riff sets the stage with sounds of boiling agony, and with the curtain having been drawn in such disturbing fashion the drums begin to chop, a big bass murmurs in musing tones, and glimmering tones create an eerie atmosphere around vicious growls. It’s a chilling experience, with derangement lurking on the edges, and becomes a monstrous one as the music stomps and brays with imperious might.

Those echoing vocals rise into harrowing doubled screams, the guitars sizzle like broiling minds, and a dismal guitar melody slithers through the methodically pounding momentum like a venomous serpent. The volume ebbs and magnifies as the song underscores fear and administers brutish beatings. Reverberating chords of misery extend like chains, dragging the listener through a terrible calamity, and the tremolo’d whine of the lead guitar channels misery and hopelessness through a death march toward the end.

If that song got you in its vice-like grip, then you should also listen to the two songs previously revealed from Aegis — “Blood Surge” and “Ashlands” — and we’ve made that easy to do (see below). Among other things, they prove that Lurk create changes from track to track, giving each song its own personality but without veering too far away from their harrowing main themes.

Transcending Obscurity plans to launch pre-orders for the album on Monday. Keep an eye on the locations linked below for the details of that news.