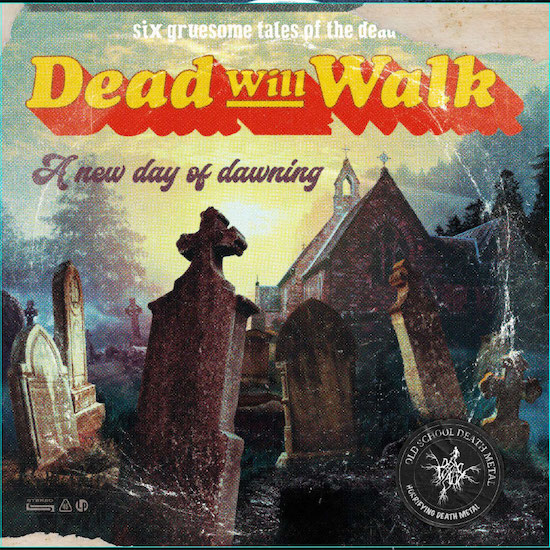 The Dutch band Dead Will Walk pack six songs into their new EP A New Day of Dawning, and you’ll get to hear every one of them today in advance of the record’s January 27th release. Horror and ferocity await you in this music, with its roots sunk deep into the fetid earth of death metal from decades past, but delivered with the killing efficiency of modern mechanized armaments and the kind of songwriting chops that make the songs highly addictive. We share these thoughts from the band:

Our goal for this release was to write songs that underline our roots for the old school underground scene. Here we have tried to convey the same feeling as from the glory days of death metal. Thoughtful songs that remain listenable and always have a small twitch. We don’t take ourselves too seriously and we wanted to record an EP that wouldn’t look out of place in a record collection from the late eighties or early nineties.

The humility in that comment is admirable, and so the task is left to us to explain just how damned good A New Day of Dawning really is and why it definitely should not be overlooked in the vast seas of old school death metal that now surround us.

The band make their horror interests plain for all to witness in the creepy spoken-word introduction to the album’s first punch, “Raise the Horde“, and then the mauling begins. The jagged and jolting riffage, tuned to a chainsawing degree of distortion, sounds like a zombie in a spasm, and yes, it punches damned hard too, thanks to bowel-loosening bass heaviness and gunshot drum-work.

Ghoulish and galvanizing music like this needs ghastly vocals, and the amalgam of horrid roars, lycanthropic howls, and hideous screams that flow through the song fit the bill perfectly. The track is a heavyweight neck-bender, but also includes grim and grisly tremolo’d melodies that give it an atmosphere that’s morbid as well as mad.

From there the band continue to light a fire under the pulse of listeners over the following five tracks. The riffs are a pack of mean and murderous hooks, and the rhythm section continue battering and bludgeoning in ways that trigger muscle reflexes, while the vocals are as deranged and rabidly bestial as you would expect from that opening song.

Depending on where you are, the riffs bray and sizzle, crawl and cavort, and hammer like giant crowbars, creating moods of freewheeling savagery, pestilential fever, and slow, blood-curdling rot. Weird and wailing lead guitars generate wraithlike sounds of misery. And in every song the band create dynamic experiences, changing tempos and moods, bringing in punk beats and pile-driving grooves, but without ever loosening their grip.

At times it takes little imagination to envision a mosh pit gone wild, and at other times the music becomes oppressive or sends chills of frightfulness down the spine, but the evocative melodies remain a key feature of why the songs are so compelling. And man, those vocals are relentlessly insane.

In a nutshell, Dead Will Walk‘s new EP deserves a lot of attention. The band may be too humble to admit it, but they really know what the hell they’re doing. They’ve got a firm grip on what made bands like Entombed, Autopsy, Necrophagia, and more recent purveyors like Death Breath such powerful forces, but they channel influences like those in ways that don’t sound like some dull re-tread. To the contrary, the music is explosive and exhilarating. The songwriting is top-shelf, the attention to detail is laudable, and the execution is… lethal.

This new EP is recommended for fans of those bands we mentioned above. It will be released on January 27th, on cassette tape from Dawnbreed Records, CD from Cavernous Records, and digital from Dead Will Walk‘s Bandcamp. On the same day, Cavernous Records will also release the compilation album As the Bowel Withers, which will include the new EP. Check out all the options via the links below.