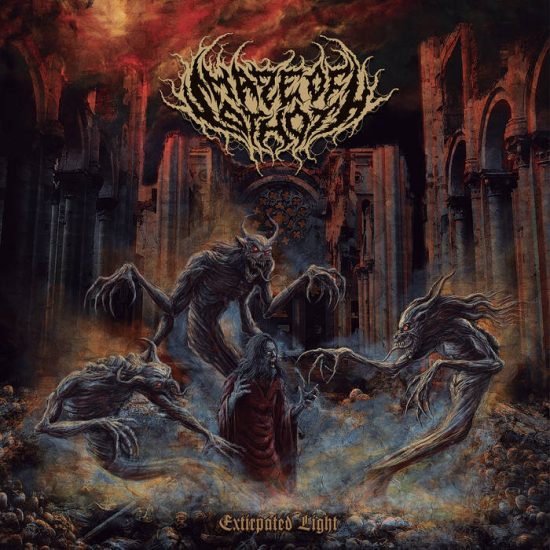 As of last night I had this round-up all ready to go. I mean, I still needed to do the writing, but I had picked a selection of music from five new releases that I thought would go really well together, and they all had fine cover art too. And then this morning I found some more just-released gems within the Niagara Falls of e-mails that crashed into our in-box overnight. What to do?

As you can tell, I decided to turn this mid-week round-up into a two-parter. Part 1 sticks with what I decided to do last night. Part 2 will include the new stuff I spotted this morning. Part 2 isn’t written yet, which means you won’t see it ’til tomorrow. Something else will probably hit our in-box overnight that will make it even longer.

We’ve had a six-year gap since this band’s debut album Soul Demise, which we premiered here and reviewed here. But at last they have a new full-length named Extirpated Light that’s headed our way on March 24th via Everlasting Spew Records. And based on the first single, it sounds like the intervening years have brought some changes in their sound, which Metal-Archives previously labeled Technical Death Metal, even though that label was missing a lot of necessary nuance.

The technical skill displayed on the lead single “Scorn of Flesh” is undeniable, and it’s abundantly vicious, but this isn’t some malformed blizzard of notes and beats. Even when the music starts flying at jet speed after the monstrous groaning and braying introductory segment, the fiendish hooks and jolting grooves are insidiously infectious. Throw in some utterly gargantuan vocals and a completely crazed fret-melter of a solo, and you’ve got a real jaw-dropper of a teaser for this new album.

The fantastically ghastly cover art was made by Nestor Avalos. 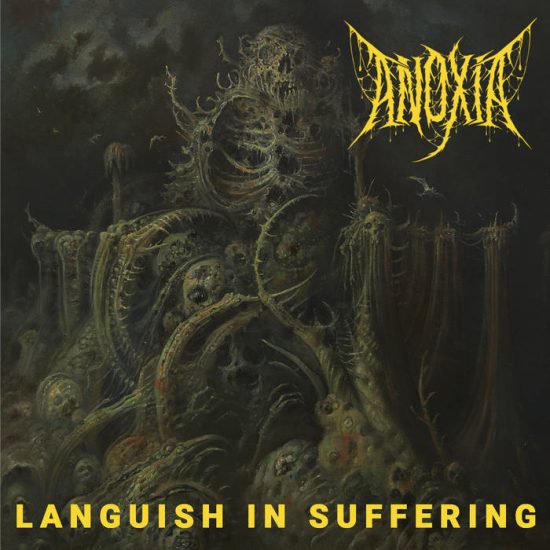 Metal-Archives lists a lot of Anoxia‘s but this quartet is from Sydney, and they’re making their recording debut with an EP named Languish In Suffering. They made an excellent choice for their cover art, turning to the maestro Paolo Girardi, but what of the music? You can get a sense of that from two of the five tracks that are now publicly streaming. It doesn’t languish, though you shall suffer.

When you hear the title track you’ll understand why I thought it fit so well with the Maze of Sothoth track (and some of the others that follow Anoxia‘s deadly work today). “Languish In Suffering” gallops and hammers, inflicts a severe beating, and writhes in broiling madness. It’s a startling combination of fleet-fingered derangement, bullet-spitting and bomb-dropping drumwork, gut-busting bass-lines, quick tempo changes, strains of malignant and morbid melody, ravenous growls, noxious gurgles, and berserk screams. I guess Brutal Death Metal might be the first label that comes to mind, but it’s technically impressive and flavored with other poisons from old school death metal too.

The second song, “Torturous Degradation (Demo)“, is if anything even more viciously unhinged. The whine of the tremolo’d riffing channels feeding frenzies of madness, but again the tempo changes without warning as the band lock into highly headbangable grooves, and of course the song inflicts brutish levels of spine-fracturing trauma along with monstrously macabre vocal ferocity. This one also includes an attention-seizing fireburst guitar solo.

The EP will be released on February 17th via 1054 Records and Gutter Prince Cabal. 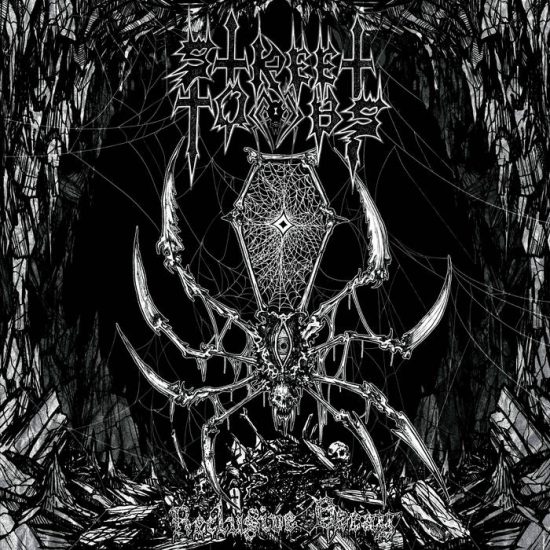 These marauders from Santa Fe, New Mexico have churned out three demos since 2018, all of which I managed to overlook. I’m paying attention now, after seeing a press release that heralded their forthcoming debut album as a combination of “the death metal grit of early Sepultura and Bolt Thrower with the rabid D-Beat/street punk of Discharge and G.B.H.”

The first single, “Rising Torment“, matches up well with the previous songs in today’s collection. It’s a powerhouse surge of obliteration, coupled with riffing that both blazes and contorts in insectile fevers, with colossal, cavern-deep vocals that add to the horrors. The convulsions in the riffage become even more lunatic, and the rhythm section keep pace, delivering their own pulse-pounding mechanisms of obliteration.

However, without losing the thread, the band do pull back on the throttle to make the music sound even more grim and gruesome, and throw in a supernatural-sounding solo as well. And those maniacally skittering riffs get stuck in the head too. Speaking of supernatural, the song ends with an unearthly outro constructed with some symphonic embellishments — which affords you the first chance to take some breaths in today’s collection so far.

The album’s name is Reclusive Decay, and it will be released by Carbonized Records on February 17th. The creepy arachnid cover art for this one was made by Todd White. 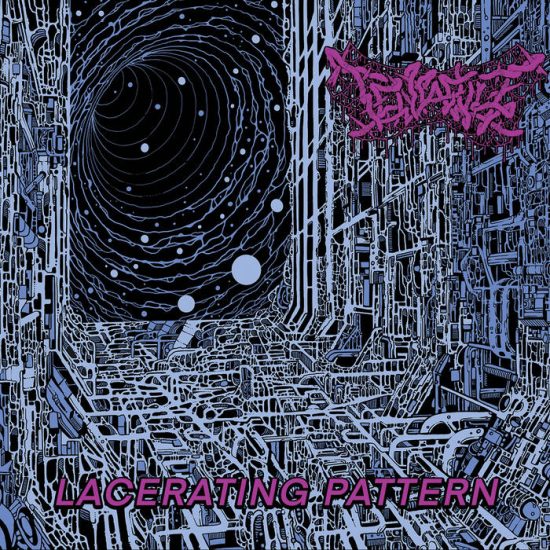 Hard for me to ignore a band with a name like Tentacult, and I’m glad I didn’t. The name of their debut album — Lacerating Pattern — was also tempting, and turned out to be an accurate clue to the music of this Sacramento band too.

The first single from this one, “Aberration Sphere“, continues bringing the death metal devastation. But, along with some tremendous pile-driving grooves and malign riffing, this song twists and turns repeatedly. The music maniacally blares, coldly claws, undergoes bizarre blurting and squirming fretwork seizures, and sounds like an excavating machine that’s become sentient and then lost its sanity.

And wow, the vocals are terrifically insane, probably the most attention-grabbing of all the macabre and gargantuan throat expulsions of all the songs in this collection.

Lacerating Pattern will be released by Transylvanian Recordings on February 3rd. Here, the wild cover art was made by Ibay Arifin. 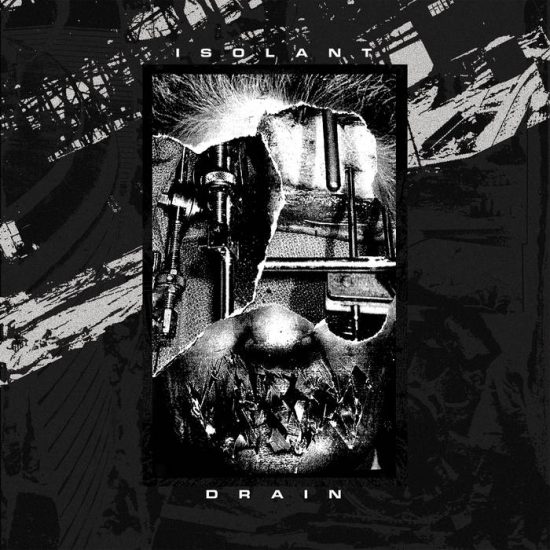 To close Part 1 of this round-up I picked a song that’s not as much of a furious death metal rampage as the first four selections today. I checked it out based on this description of the music: “The band creates a cold and crushing blend of GODFLESH/SWANS/SCORN industrial metal mixed with the bottom-caving heaviness of death-doom and British stenchcore”.

The first single, “Inner Tomb“, is a gigantic subterranean stomp, and around those mid-paced upheavals the band weave grim slithering and screaming tones, plus vocals that are truly sinister and ghastly. The massive grooves change in their methods of trauma, and the surrounding music wails in agony. The bass grumbles and flares of dolorous melody go up, begging for help, but no mercy is to be found, especially from those ghastly gasps, werewolf howls, crocodile growls, and strangled gurgles.

This is nightmare fuel, but the kind that affixes itself to the reptile brain in other ways too (sitting still while this dark and demented tale plays out is damned hard).

The song is from an EP named Drain that will be released by Sentient Ruin on February 24th. The cover art here is the twisted work of P. Van Trigt.