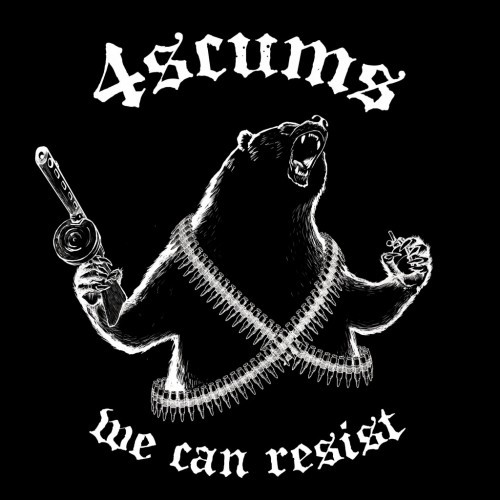 I had this little itching sensation in the back of my skull, a nasty little nagging voice buzzing in the brainstem, telling me: “You can’t end the week with that post about In Flames, Mastodon, and Opeth!!! Did you leave your balls in bed this morning??? Where’s the fucking filth?!?!?”

And right about then I stumbled across a link posted by a Facebook friend to a song by a Russian band named 4scums. Problem solved!

A little investigation revealed that 4scums have released a 2009 album named Пёс Войны and a 2010 EP entitled We Can Resist. Because the EP is available as a free download on Bandcamp and is streaming there, I gave it a spin.

We Can Resist serves up five songs that are best played as loud as you can stand it. They’re short, savage, and incendiary — and really well done. The music is a raucous high-speed rampage of metallic crust punk. The riffs are infectious as hell, the soloing is white hot, the drummer can fly, and the vocals (in Russian) are a howling spray of brimstone and grit. END_OF_DOCUMENT_TOKEN_TO_BE_REPLACED