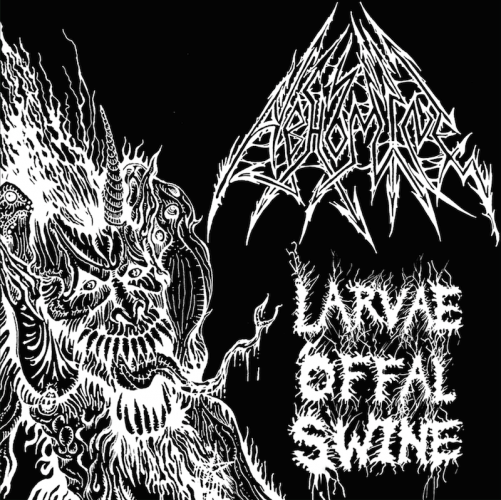 The name Pete Helmkamp will be a familiar one to fans of underground terrorists such as Angelcorpse, Order From Chaos, Revenge, and Terror Organ — all of them bands whose ranks have included Helmkamp at one time or another. But he also has a solo project named Abhomine, and near the end of this month Hells Headbangers (and Osmose Productions in Europe) will release Abhomine‘s debut album, Larvae Offal Swine. Today we have the pleasure of bringing you the stream premiere of one of the album’s nine tracks — “Nest of Disgust”.

Larvae – Offal – Swine may be just three words stitched together, and the same could be said of the album’s intro track, “Worm Pig Shit”, but the words clearly weren’t chosen randomly. They manifest a disgust for much of humanity that’s also reflected in the venomous offensives launched by the music. But while misanthropy animates the lyrics and powers the sound, the songs will also sink their fangs into your neck and bend it to their will. Which is just a metaphorical way of saying that the shit rocks hard. END_OF_DOCUMENT_TOKEN_TO_BE_REPLACED