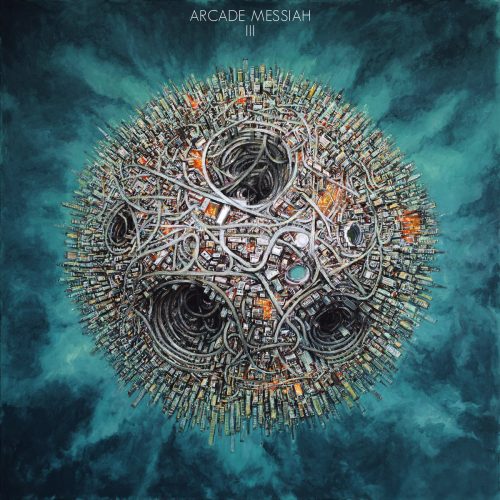 Six days ago we wrote about a recently released video for a song called “Revolver” from a new album by the UK band Arcade Messiah. A few days later Arcade Messiah released a massive second track (“Deliverance”) through the alternative music site Arctic Drones. And now we have the pleasure of announcing the premiere of a third song: “Life Clock“. Like “Revolver”, it comes with an engrossing video made by darwinfish105.

The album that includes these three songs (and three others) is the third Arcade Messiah full-length, and it will be released through Bandcamp on November 25. Arcade Messiah is the solo project of UK musician John Bassett, who is also the singer, songwriter, and producer of UK progressive metal band KingBathMat.

Attempting to capture the music on the new album in genre terms is difficult, but one could say that it combines progressive metal with post-rock, sludge, doom, and stoner rock. It’s a fascinating interweaving of sounds and styles that should appeal to fans of bands ranging from Cloudkicker to Mastodon to Russian Circles, and beyond. END_OF_DOCUMENT_TOKEN_TO_BE_REPLACED

To begin today’s round-up I’m stepping off our typical beaten paths of blood-lusting savagery with music from a band I’ve only discovered recently — Tumbleweed Dealer from Montréal. Their third album, Tokes, Hatred & Caffeine, the cover of which is visible above, will be released on November 21, 2016. END_OF_DOCUMENT_TOKEN_TO_BE_REPLACED