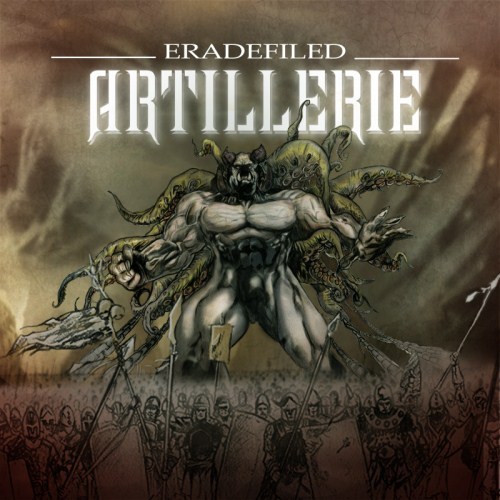 [EDITOR’S NOTE: When we recently named a song by India’s Demonic Resurrection to our list of last year’s most infectious tunes, we observed that 2010 was the year in which we here at NCS had discovered the joys of Indian metal. In addition to DR, we heard and wrote about albums by Bhayanak Maut, Infernal Wrath, Heathen Beast, and Skrypt. And we also expressed our interest in continuing to explore Indian metal in the New Year. That led to a correspondence with Siddharth Darbha, a musician and close observer of the Indian metal scene. Today, we’re posting the first of what we hope will be regular contributions from Siddharth about Indian metal. This one is his review of a new album by New Delhi’s Artillerie.]

Artillerie’s 2008 release, New Offensive, was well received and validated the addition of a new flavor to Indian metal from a capital perspective, joined by Undying Inc.’s EP, Evilution Of A Manimal. New Offensive was exceedingly groovy and live-worthy, in-your-face material, and it invited high expectations from fans. Artillerie has been playing for about four years now and took a lot of time out, playing comparatively few gigs and concentrating on writing new material. They released a two-song EP Prelude To Chaos, featuring trailers of their new album, Eradefiled.

Artillerie tied up with Grey and Saurian Records to work on Eradefiled, later choosing to release it independently as a free internet download. (You can download it here.) It consists of 9 songs spanning 40 minutes. Artillerie spent a lot of time adding depth to the theme of this lyrically conceptual album, with their blog detailing the self-fashioned fictional background storyline for their album.  (more after the jump . . .) END_OF_DOCUMENT_TOKEN_TO_BE_REPLACED