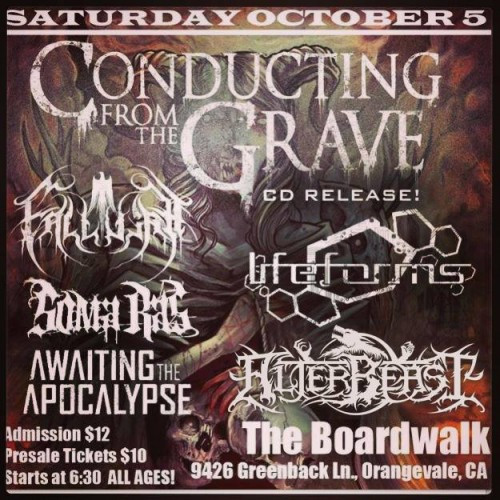 (In this post DGR reviews the CD release show of Conducting From the Grave (with friends) at The Boardwalk venue in Orangevale, California, on October 5, 2013.)

Saturday (Oct 5) was exciting for a several reasons. First, it was my chance to see Conducting From The Grave take the stage fresh off the release of their new disc. Second, I also got to see Soma Ras again. Third, I’d get to see the newly christened Alterbeast and find out if my generally high opinion of them from their GBAA days would still hold up. And finally, and I swear this is true, I would finally get to see Fallujah — more on that later.

The whole show was basically a celebration for the Conducting guys, and they were treated like conquering heroes the whole night, with a pretty packed Boardwalk venue and a crowd receptive to every band who took the stage. Also, holy shit, were there a lot of cameras at the venue too; I guess quite a few people wanted to have their own bootlegs of the show that night.

One of them was right next to me for the whole show, someone who I would later find out was working for clothing/media company Atrocious Works (Home site and Facebook page) and has been posting the material online as he has uploaded it. You should obviously check them out because they’re adding to the huge archive of live shows on the net that are out of Sacramento venues, and a huge thanks to them for that. Right now, the videos consist of front-row views (and damn good sound quality) of Alterbeast, Lifeforms, and Conducting From The Grave. END_OF_DOCUMENT_TOKEN_TO_BE_REPLACED 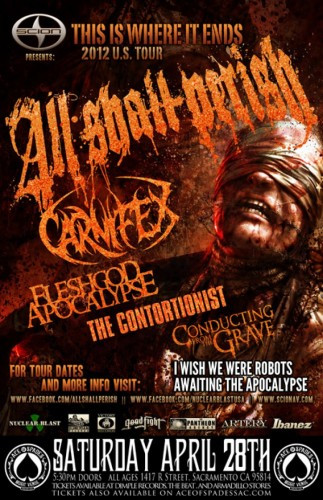 Oh, and Fleshgod. Did I mention Fleshgod? Because I’d finally get to see Fleshgod Afuckingpocalypse in a live setting. I could’ve listened to two hours of Hare Krishna bullshit as openers if it resulted in me getting the solid forty or so minutes I did of Fleshgod on stage. END_OF_DOCUMENT_TOKEN_TO_BE_REPLACED