It seems that every year, at least in recent memory, brings reunions and revivals. The latest Godflesh album, Post Self, wasn’t exactly a reunion or a revival — A World Lit Only By Fire did come out only three years earlier — but it still seemed like a revival, or at least a resurgence, a vivid rekindling of memories without sounding like a cash grab. END_OF_DOCUMENT_TOKEN_TO_BE_REPLACED 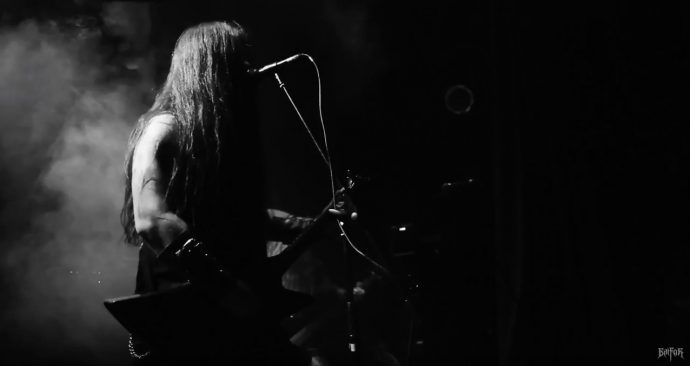 In mid-January of this year we had the pleasure of premiering a stream of Black Serpent Rising, the new third album by Ukrainian black/death metal band Balfor, in advance of its January 15 release by the French label Drakkar Productions, and now we have for you a new video of the band performing the song “Dawn of Savage“, filmed at their album release show in Kyiv.

For those of you who may still be new to Balfor, the line-up includes current and former members of such notable groups as Khors, Raventale, and Hate Forest. Black Serpent Rising follows the band’s last album, Barbaric Blood, by six years, with the 2013 EP Heralds of the Fall dividing the wait and with significant line-up changes occurring over that interval as well. END_OF_DOCUMENT_TOKEN_TO_BE_REPLACED

Serpents, fire, blood, and bone. Torches burning and bonfires blazing. A night lit by sparks and cloaked by wood smoke from the blaze. Invocations of power and praise to the drawing of steel. Remembrances of a barbarous past, consecrated in blood. The video we’re premiering captures such visions, but your mind’s eye could create them simply from the music.

The song is “Serpents of the Black Sun” and it comes from Black Serpent Rising, the third album by the Ukrainian band Balfor, which will be released on January 15, 2017, by Drakkar Productions.

Balfor’s line-up includes current and former members of such groups as Khors, Raventale, and Hate Forest, and this new full-length follows the band’s last album, Barbaric Blood, by a long six years, with the 2013 EP Heralds of the Fall dividing the wait. END_OF_DOCUMENT_TOKEN_TO_BE_REPLACED

In this post we present the premiere of a lyric video for a song called “Crimson Stronghold” by the Ukrainian band Balfor, whose ranks include current or former members of Khors, Raventale, and Hate Forest. It comes from their first new album in six years, Black Serpent Rising, which is projected for release by Drakkar Productions on January 15, 2017.

“Crimson Stronghold” is immense in its sound, produced in a way that causes it to shiver the spine and crack the skull. And it’s powerful in other ways as well, apart from the sheer, almost-physical impact of the riffs and rhythms. END_OF_DOCUMENT_TOKEN_TO_BE_REPLACED