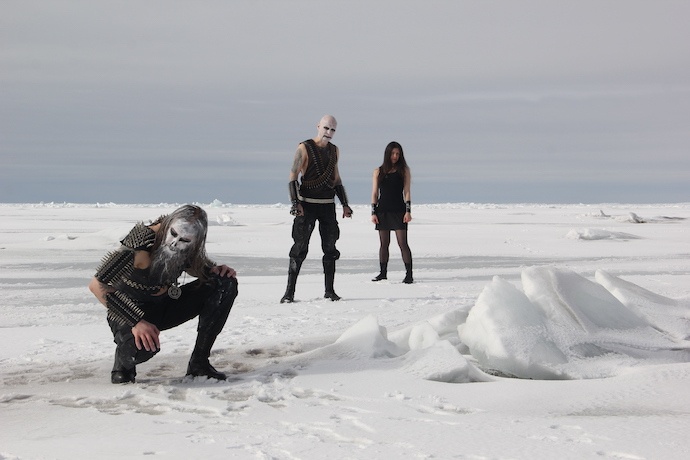 (Comrade Aleks continues his streak of fascinating interviews with this very extensive one with Para Bellum of the long-running Russian black metal band Blackdeath, whose latest work Also sprach das Chaos is officially being released today.)

Saturn Sector, Fucking Fullmoon Foundation, Satan Macht Frei, and more… Blackdeath have recorded nine full-length albums since the late ’90s and a bunch of smaller releases, and they have done much more for the underground black metal scene besides recording and performing their blasphemous incantations.

Blackdeath’s line-up had just a few minor changes for years and its core since the first day, built by brothers Colonel Para Bellum (aka Dmitry, bass, vocals, lyrics) and Abysslooker (aka Denis, guitars, songwriting), has been accompanied by Polar Maya (drums) since 2007, and it seems like this line-up works in the most productive way one could expect. Being founded in 1995 under the name Draugwath, this band remain one of the most stable and creative black metal acts in Mother Russia’s territory and they prove their status once more with a new tenth album, Also Sprach das Chaos, coming out on the 8th of October via End All Life Productions.

We made this interview with Colonel some time ago but the decision was made to wait for the new album’s official release, and so the day has come. If the words “True Black Metal” mean something for you still, here we go. END_OF_DOCUMENT_TOKEN_TO_BE_REPLACED