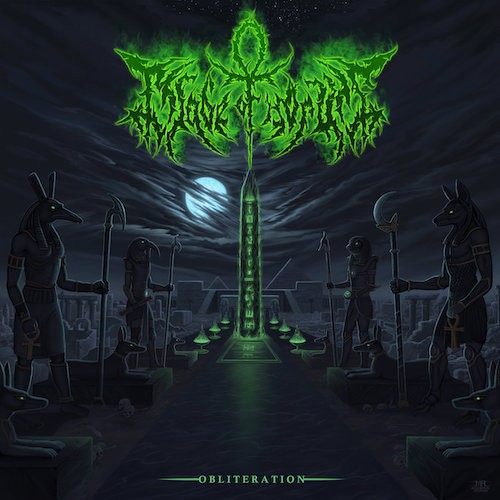 Blade of Horus is a murderously deranged five-headed cybernetic organism that first achieved sentience (and a taste for human flesh) in Sydney, Australia. It began its slaughtering campaign for superiority with a substantial and accurately titled 2016 EP named Monumental Massacre. Notwithstanding the ferocity of that opening assault, a few huddled enclaves of shivering humanity survived, and so Blade of Horus is returning to finish the job, with an album named Obliteration.

The new album is also accurately titled, as anyone who heard its first single already knows. That track, “Cyber Demon“, featured guest appearances by drummer Dave Haley (Psycroptic) and vocalist Duncan Bentley (Vulvodynia). It also revealed that Blade of Horus have sharpened their blades, stoked the fires of their lust for destruction, and managed to become even more strategically-minded in the deployment of their impressive technical skills since Monumental Massacre. As further evidence of these advances before Lacerated Enemy Records discharges the whole thing on December 15th, we present the album’s jaw-dropping title track. END_OF_DOCUMENT_TOKEN_TO_BE_REPLACED 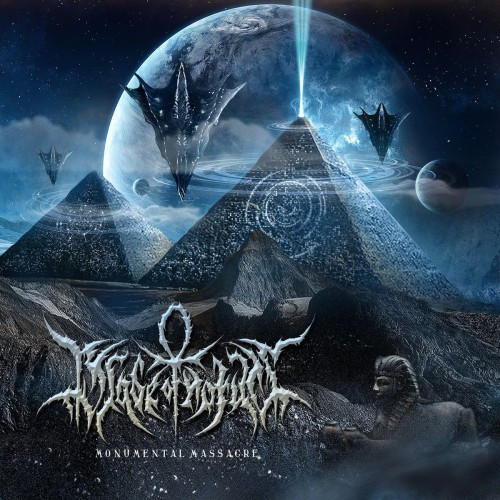 Blade of Horus have emerged from Australia with a debut album entitled Monumental Massacre that’s scheduled for release on January 29 by Lacerated Enemy Records. They enlisted the masterful Kevin Talley to record drums for the album, and as you can see, it’s also introduced by some eye-catching cover art. Today we’re helping premiere the album’s first advance track, “Descent Into the Cosmic Realm of Everlasting Madness”.

With Talley’s able assistance, Blade of Horus inflict plenty of head trauma in this new song, both the physically bludgeoning kind inflicted by pile-driving riffs and booming bass work and the kind that disrupts neural connections with deranged lead guitar excretions. And speaking of excretions, the vocal tag-team deliver an amalgam of deep growls, incinerating shrieks, and vomitous gurgles — all the better to complete the job of dismantling whatever was working normally inside your skull. END_OF_DOCUMENT_TOKEN_TO_BE_REPLACED