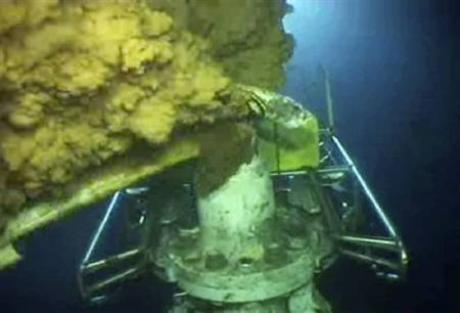 We don’t read The Onion except when when one of our buds sends us a link — which happened yesterday. The piece we read has nothing to do with metal, but it’s just too fucking perfect not to share.  If you’ve already seen it, we’ve got another new post today below this one about a creepy new music video from a band called Criminal. If you’ve already seen that one, well, I guess we’re just shit out of luck for today. Anyway, without further introduction, here’s that piece from The Onion, which appeared under the headline, “MASSIVE FLOW OF BULLSHIT CONTINUES TO GUSH FROM BP HEADQUARTERS.”

LONDON—As the crisis in the Gulf of Mexico entered its eighth week Wednesday, fears continued to grow that the massive flow of bullshit still gushing from the headquarters of oil giant BP could prove catastrophic if nothing is done to contain it.

The toxic bullshit, which began to spew from the mouths of BP executives shortly after the explosion of the Deepwater Horizon oil rig in April, has completely devastated the Gulf region, delaying cleanup efforts, affecting thousands of jobs, and endangering the lives of all nearby wildlife.

“Everything we can see at the moment suggests that the overall environmental impact of this will be very, very modest,” said BP CEO Tony Hayward, letting loose a colossal stream of undiluted bullshit. “The Gulf of Mexico is a very big ocean, and the volume of oil we are putting into it is tiny in relation to the total volume of water.”

Hayward’s comments fueled fears that the spouting of overwhelmingly thick and slimy bullshit may never subside.  (more after the jump, including some ghastly photos . . .) END_OF_DOCUMENT_TOKEN_TO_BE_REPLACED