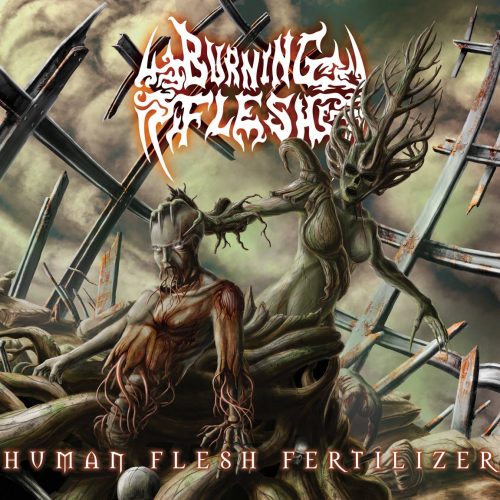 (This is Vonlughlio’s review of the third album by the multinational group Burning Flesh, which was released in March of this year.)

I spent a recent Sunday afternoon, while recovering from an illness, catching up with some music I had missed earlier. I recalled that at the beginning of the year a friend of mine suggested the band Burning Flesh in a FB convo, and I turned to their third album Human Flesh Fertilizer. I went back and found the play-through video for an album track he had sent me and revisited it. Shame on me that I did not pay more attention back then.

This band has members from Switzerland and France and they have been an entity since 2005, releasing a demo in 2007, a debut called Unconscious Deformity in 2010, and a sophomore album in 2013, New Chaos Order. I decided to listen to those previous albums and then re-listened to the new one. Despite the constant change in members, it’s apparent that guitarists Diego and Anthony have been able to maintain a permanent vision of what the band should be, and therefore they obviously form the core of this project. END_OF_DOCUMENT_TOKEN_TO_BE_REPLACED