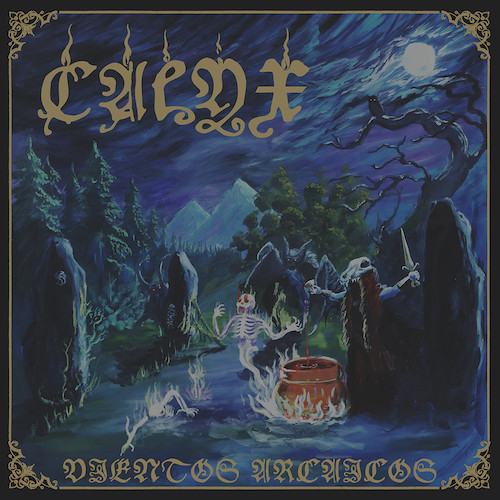 2019 is shaping up to be a banner year for medieval black metal. For those who are paying attention, it’s also proving the diversity of that particular sub-genre of music as different bands interweave strains of ancient melody from different parts of Europe into their compositions in different ways, and using different instruments, some very old and some modern.

The Spanish band Calyx will certainly be among the front rank of what 2019 has to offer to fans of medieval black metal — or fans of black metal of any stripe, for that matter — through their debut album Vientos Arcaicos, which will be released by Iron Bonehead Productions on May 17th. Their inspirations are described as “firmly entrenched in the Middle Ages, sweeping across the native legends of the Iberian Peninsula as well as castles, ruins, Aragonese Pyrenees, and decrepitude”, but they have channeled those inspirations in melodically memorable black metal of tremendous power and emotional intensity — as you shall discover through our premiere of a track from the new album called “La Sima“. END_OF_DOCUMENT_TOKEN_TO_BE_REPLACED

Deiphago describe their music as “Experimental Hyper-speed Satanic Bestial Metal” — and every word of that is true. As I’ve written before, their music doesn’t sound like anything else you’re likely to find in the realms of black metal or black/death. It viciously shoves us out of our musical comfort zones; it’s likely to leave most listeners bewildered and bedazzled (or at least severely unbalanced). END_OF_DOCUMENT_TOKEN_TO_BE_REPLACED