Deiphago describe their music as “Experimental Hyper-speed Satanic Bestial Metal” — and every word of that is true. As I’ve written before, their music doesn’t sound like anything else you’re likely to find in the realms of black metal or black/death. It viciously shoves us out of our musical comfort zones; it’s likely to leave most listeners bewildered and bedazzled (or at least severely unbalanced). 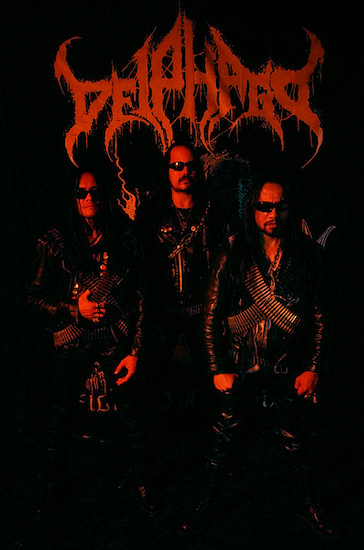 As a broad musical genre, extreme metal is well-suited to manifesting the sensations of chaos, and that has certainly been one of black metal’s chief objectives. Deiphago are old hands at this, and they offered fresh proof last September when they began streaming “Deus Alienus (God of the Other Side)”, one of the eight tracks on the band’s fifth album, I, The Devil, which is now set for release on April 30th (Walpurgis Night) by Hells Headbangers. A couple of days ago, they revealed a second track from the new album, “11:4:6“.

In the scheme of black metal practiced by Deiphago, “chaos” takes on layers of meaning that are usually missing elsewhere. It’s not just the extravagant violence of the sound that Deiphago channels, it’s also the disruptive assault they mount on black metal conventions; and yes, as most of us black metal fans know, contrary to the genre’s origins there is often a rigid adherence to convention in the music of many black metal bands, which amounts to a paradoxical musical conservatism.

Deiphago will have none of that. They are “traditional” in their dedication to audio violence, but equally dedicated to making songs such as “11:4:6” such freakishly twisting and turning trips that they become white-knuckle rides. And they’re such technically advanced executioners that they take all the hair-pin turns with ease, even if they leave you shaken and stirred.

I, The Devil was recorded at Godcity Studios with Kurt Ballou (Converge), and it was mastered by Brad Boatright at Audiosiege. The striking cover art was created by the great Joe Petago. 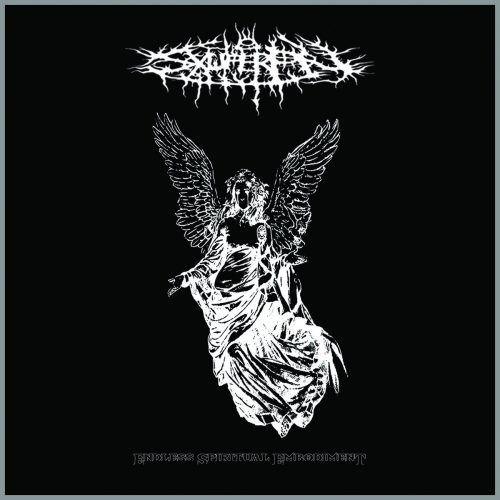 For those who might not be familiar with Sxuperion, it’s the solo project of a California musician (Matthew S.) who is also the drummer in other excellent bands, including Valdur and Weverin. I discovered Sxuperion in January of 2016 through Sxuperion’s split release with  Verräter (discussed here). Following that split, Sxuperion released an excellent album named Cosmic Void (reviewed here), which only solidified my interest in the project. And after that Sxuperion released a 2017 EP named Myriad, which thematically completed the narrative of Cosmic Void, focusing “on the view of a world being governed by human insecurities through the eyes of a space traveler”. I had a few things to say about that release too.

Now there’s a new album named Endless Spiritual Embodiment that’s set for release by Bloody Mountain Records on May 3rd. The first advance track, “Sacred Chamber of Enlightenment“, struck me as a good follow-on to that Deiphago song, because it’s kind of bewildering, too. At first, a heaving, undulating, python-like riff moves through a wash of scathing guitar noise and percussive tumult, and things get even more strange after that as the riff changes, and as weird, cosmic tonalities take over the song in ways that make the music even more chilling.

The gruesome abyssal vocals are chilling as well, roaring in slow motion as the backing instrumentals revert to blazing assaults on the senses, with glimmering tonalities spearing out of the adrenaline rush like alien apparitions. The song will get your pulse pounding, but is equally effective in creating an atmosphere of dementia and dread. 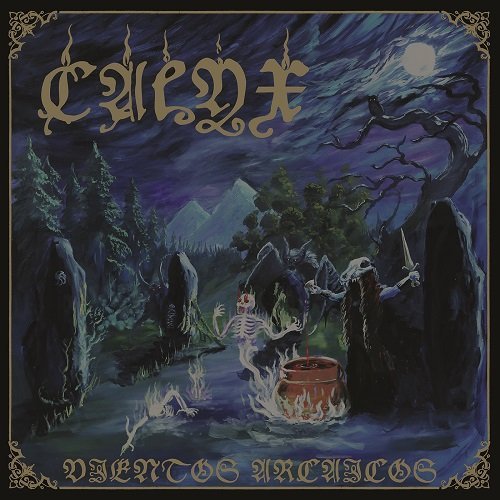 So far I’ve included music in this post by bands who are known quantities, but this next song comes from a debut album. Entitled Vientos Arcaicos, it’s the first full-length release by a Spanish band named Calyx, whose previous releases (which I haven’t heard) consist of three demos, the most recent of which was 2017’s Codex Tormentorvm.

The quartet’s inspirations are described as “firmly entrenched in the Middle Ages, sweeping across the native legends of the Iberian Peninsula as well as castles, ruins, Aragonese Pyrenees, and decrepitude”. The first advance track, “Loarre“, makes the third song in a row for this collection that I think could fairly be characterized as well out of the ordinary.

There’s indeed something about the piercing, dancing melody in the song’s opening that sounds like a throw-back to a different age, yet there’s something sinister and unsettling about it, too. The sinister aspects of the melody become more pronounced when the full band pick it up and run with it over a pounding and bounding drum rhythm. The blazing riffs still have a vibrant, dervish-like quality, and the solo in the middle of the song is downright glorious — but the solo has a melancholy quality as well, and the mood of the riffing takes dark and vicious turns (the vocals are persistently vicious).

At the end, the medieval air of the song becomes most pronounced, underscoring the ancient resonance within the music. It makes for a sublime finale to a very alluring song.

Vientos Arcaicos will be released by Iron Bonehead Productions on May 17th (CD and LP).

(Thanks to eiterorm for linking me to this track.) 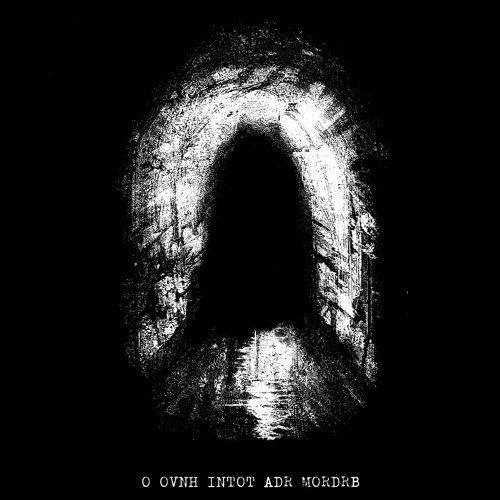 I don’t expect most people to enjoy the final track in Part 1 of today’s collection, at least not at first blush. And I don’t mean to imply that there’s something wrong with you if you don’t. The attraction of Voëmmr’s music is peculiar, and thus only a particular kind of peculiar person is likely to embrace it.

Of course, I’m one of those peculiar people, and have written about Voëmmr before — in fact, I premiered the band’s debut album Nox Maledictvs (2017) and a follow-up demo named named Sombr Moebrd (2018). It is a part of the Portuguese Aldebaran Circle, which includes Ordem Satanica, Trono Além Morte, and Occelenbriig, and claims inspiration from the music of the French black metal bands in Les Légions Noires.

The newest Voëmmr release is a second album named O ovnh intot adr mordrb, which continues Voémmr’s usage of a cryptic dialect created by the French LLN band Belketre. As revealed by the song below, “Carpatr Tzaeb“, Voëmmr’s purpose seems not merely to prick your nerves but to hack and slash them. Yet I think this isn’t an exercise in sadism, but instead a means of making your calcified mind more receptive to other bewildering and beguiling currents within the music.

The reverberations of the slow opening guitar melody themselves prove to be immediately beguiling, even dreamlike. But there’s nothing romantic or seductive about the extravagant lycanthropic howls and cries of the vocalist. They’re cacophonous and terrifying enough to raise goosebumps on your arms. The layers of distortion in the sound are also abrasive, giving the music a dense and enveloping quality, yet the shimmering and squirming melodies that pass slowly and then more feverishly  across the changing (and usually head-moving) drum rhythms operate like dark spells, creating a midnight hallucination that’s strangely seductive — and then increasingly nightmarish.

O ovnh intot adr mordrb will be released by Harvest of Death (LP and cassette tape) on April 20th. Pre-orders aren’t available yet, but watch the spaces below for further info.

(Thanks to Miloš for making me aware of this new track.)