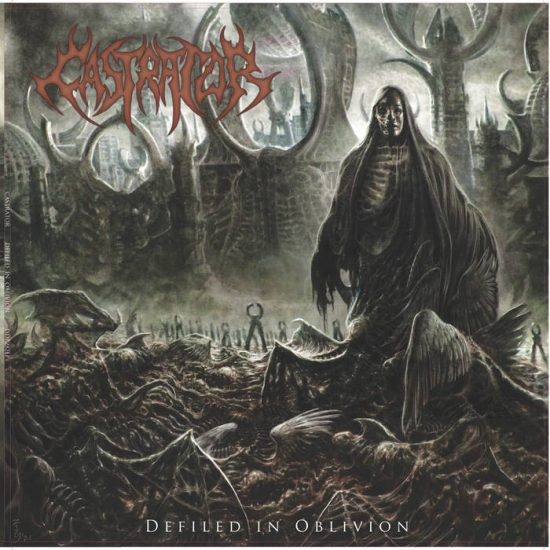 (Our man DGR prepared the following review of a long-awaited debut album by NY-based Castrator, which is out now on the Dark Descent label.)

This is one that’s been hovering in the periphery for some time now, so it’s good to have the chance to finally dive into it.

Castrator are a project we’ve been watching for a while around these here parts. Although their activities have had long quiet periods – including those within this site’s general lifespan – there was never a sense that the group had split. The 2015 No Victim release has always lurked somewhere just off the purview but within sight, in part because the members of this particular death metal project were in so many bands that we have crossed paths with. For instance, their bassist R.M has time spent in both Derkéta and Gruesome.

In the timeframe between No Victim and the group’s newest album Defiled In Oblivion – released at the tail end of July – Castrator‘s lineup has changed somewhat, localizing its musicians a bit closer, but there is no question about it when it comes to the music. Castrator‘s death metal bona fides are fully realized, and the ten rumbling songs here – nine originals and one tackling of Venom‘s “Countess Bathory” – are demonstrations of that fact time and time again. END_OF_DOCUMENT_TOKEN_TO_BE_REPLACED