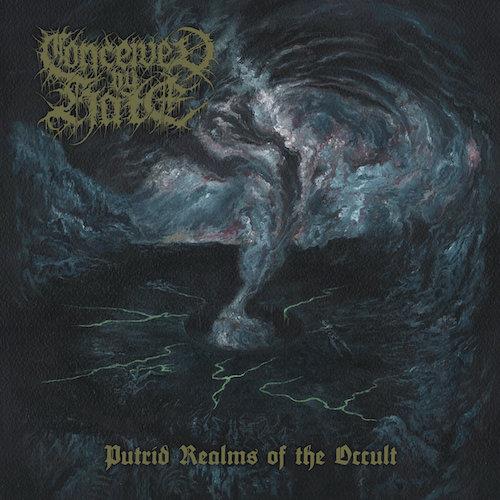 Four years after their second album, the Salvadoran band Conceived By Hate returns with another menacing and malignant full-length entitled Putrid Realms of the Occult. A nine-track release that’s as electrifying as it is monstrous, the album is now set for co-release on May 30th by Satanath Records (Russia) and Morbid Skull Records (El Salvador). Once again, the project’s mastermind Morbid is at the helm, performing guitars, bass, and vocals, and he is again joined by session drummer Iosif Najarro.

Having tweaked the production and growing even less tolerant of melody (and more focused on achieving a rabid sound), Conceived By Hate lashes together death metal, thrash, and black metal to create a musical juggernaut, but one that’s gruesome and horror-stricken as well as maniacally destructive. The song we’re premiering today, “Drowned In Tomb Mold“, is a riveting example of these features. END_OF_DOCUMENT_TOKEN_TO_BE_REPLACED