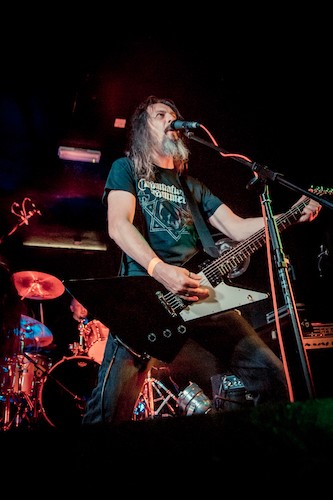 (Comrade Aleks brings u this interview of Tim Preston, guitarist/vocalist of the UK band Damnation’s Hammer.)

Damnation’s Hammer is a strange beast. They’re usually tagged as “death doom”, but despite this label this UK project is strongly influenced by the late Celtic Frost sound. As the band’s founder Tim explains, “The vision of the band has always been to create dark, doom-laden metal incorporating surreal atmospherics”.

Tim Preston (guitars, vocals) has been in the underground scene since the early ’90s, so he knows for sure a few things about how to play dark and heavy, and the band’s second album Unseen Planets, Deadly Spheres was recorded with a new, though experienced, lineup.

And yet despite the new blood in the veins of Damnation’s Hammer, the sound of this album is very close to the debut record, Disciples Of The Hex. What new things did Tim and his crew incorporate into the band’s sound? Let’s ask Tim. END_OF_DOCUMENT_TOKEN_TO_BE_REPLACED