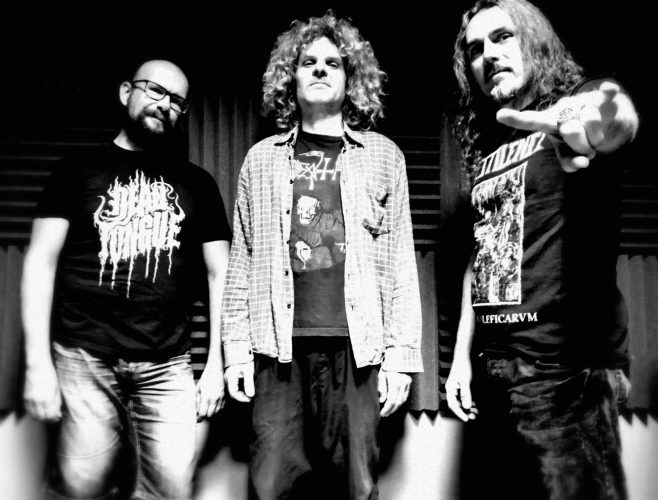 Dead Tongue hail from Padua, Italy, and have embraced the likes of Autopsy, old Carcass, Abscess, and Necrophagia as their musical brethren. Their second album, Disgorge Through the Eyes, was released last fall and provided a livid, 16-track manifestation of diseased old school death metal done right. The album has been available digitally since its release but is now being made available on CD, and to celebrate the occasion Dead Tongue have produced a video that we’re happily introducing today.

I bought the album last fall after hearing only one track, the beautifully named “Ethics of the Jugular“, which buried its hooks in my brain from the first listen and proved to be so addictive that it took me a while to get past it and into the rest of the album. But I eventually discovered that my impulsive purchase decision was a smart move, because the rest of the album is also killer, and pulls from a rich range of influences, which are not limited to gruesome old death metal.

Another track on the album (among many) that proved immediately addictive once i got to it is the one we’re featuring in this new video, “Prejudice On the Symbiosis“. END_OF_DOCUMENT_TOKEN_TO_BE_REPLACED

The Norwegian wrecking crew Blood Red Throne, whose latest album (Union of Flesh and Machine) our Andy Synn called “yet another top-tier terminator of crushing, grooving, blasting belligerence and cold, calculated aggression”, recently discharged a lyric video for a new song from their next album, Fit To Kill, and that’s how we’ll begin today’s blood-letting. END_OF_DOCUMENT_TOKEN_TO_BE_REPLACED