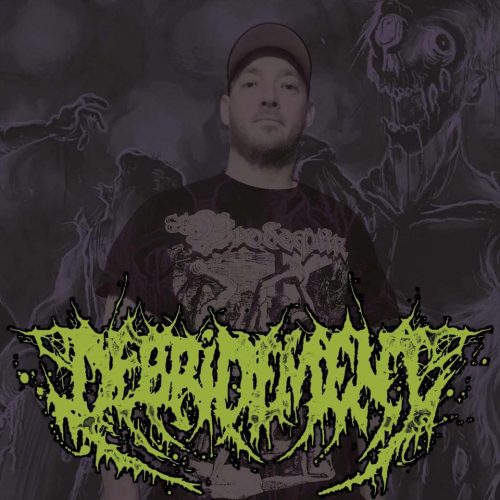 (NCS contributor Vonlughlio reviews the new album by Debridement from Northern Ireland, which will be released on August 23rd by Rotten Roll Rex.)

The music of the band that’s the subject of this small write-up is just pure and filthy fun. Yes, you read that correctly, and why do I say that? ‘Cause it’s Slam/BDM done right, and that is intended to make you smile (even though you shouldn’t) and enjoy the music for just that: It’s fun and entertaining.

That band is a one-man project called Debridement, run by Mr. Brown (guitarist from the band Oncology) from Northern Ireland. I discovered this project back in 2016 with their EP Reduced to a Pile of Putrefying Slop and thought to myself, with a big smile, this is indeed filthy and disgusting, and sloppy (production-wise). It showcased the musical ability of Mr. Brown, who performed all the instruments, while envisioning how this style of goregrind should sound. It was 18 minutes of pure entertaining, horrible music, executed precisely and leaving the listener wanting more. END_OF_DOCUMENT_TOKEN_TO_BE_REPLACED