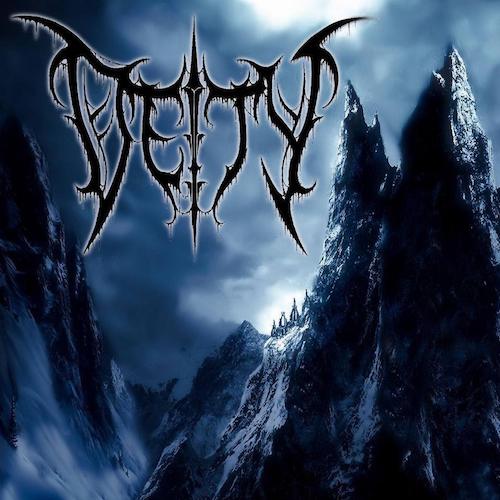 (TheMadIsraeli wrote this review of the self-titled debut album by the Canadian death metal band Deity, which was released earlier this month.)

I have a very hard time getting into a lot of the technical and progressive death metal that’s being released these days because so much of it misses the fucking point. It’s all plastic mixes, weak noodly riffs, with death metal as the least prevalent of ingredients. It just… isn’t death metal, man. Whether bands are fellating their fretboard with an overly digitized guitar tone and simply running through rote, stock melodic progressions or playing what amounts to really bad progressive rock with weak black metal vocals and no power, it’s no wonder I’ve tended to gravitate toward either old school death metal, or death metal that’s just straightforward and no bullshit.

Sometimes, though, I run across bands like Deity and my hope is restored. I remember the beauty, the majesty, and the putrid overwhelming crushing power that can be channeled once the musicianship and spirit are on par with each other. END_OF_DOCUMENT_TOKEN_TO_BE_REPLACED

I usually try to describe what happens in the songs we premiere. I’m not positive why I do that, since the whole point of a premiere is to provide a platform where people can immediately listen for themselves. I suppose it’s fun for me, even if it doesn’t contribute anything important to listeners. But in the case of this new song by the Canadian death metal band Deity that we’re premiering today, I was on the verge of giving up completely.

You see, “Sacrificium” is so blindingly fast and so technically jaw-dropping that attempting to provide even a rough linguistic map of its course is a fool’s errand. It’s a truly breathtaking rocket ride, a non-stop jolt of adrenaline, so blazing in its exuberance that trying to nail it down with words seems unjust, even if that could be done. END_OF_DOCUMENT_TOKEN_TO_BE_REPLACED