Together they recorded an album at Woodshed Studio in Germany with V. Santura of Triptykon and Dark Fortress fame, who also mixed and mastered the music. The album is named Uljas uusi maailma (“Brave New World”) and it’s now scheduled for release by Svart Records on November 23. The cover art by Maahy Abdul Muhsin is a real eye-catcher — it’s right after the jump. END_OF_DOCUMENT_TOKEN_TO_BE_REPLACED 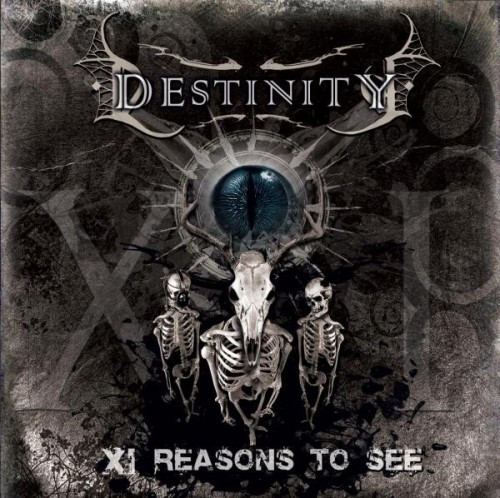 We’re gonna cut this a day short and call it a wrap with this post, since I now officially have other content to review. So, let’s close this baby up, shall we?

Destinity is the product of bringing together EVERYTHING that has been introduced into the melodeath style up to this point and a band who have evolved with the style. You may be surprised when I tell you that these guys have 7 albums. Yes seven. And you’ve probably never heard of them.

Destinity is also proof that despite its rising prominence, the French metal scene is still unfairly overlooked, because this is some of the best melodeath I’ve ever heard. The band’s most recent album,  XI Reasons To See (2010), is a slab of furious, fast, thrashing and blasting melodeath with dark symphonic elements and even some small electronic moments, with harsh, old-school death metal vocals that call back to the greats like Martin Van Drunen of Hail Of Bullets or Patrick Mamelli of Pestilence. If you want your list of influences for reference, it’s quite obvious this band listened to lots of old Arch Enemy, At The Gates, and Hypocrisy. LOTS, OF HYPOCRISY.

This album is made by the sense of drama it channels within its brutal mission statement. Moments such as the opening instrumental “Just Before…” transitioning into “A Dead Silence” show definite veteran status on the compositional front. This album makes a grand, profound entrance most bands have trouble invoking.  (more after the jump . . .) END_OF_DOCUMENT_TOKEN_TO_BE_REPLACED