Together they recorded an album at Woodshed Studio in Germany with V. Santura of Triptykon and Dark Fortress fame, who also mixed and mastered the music. The album is named Uljas uusi maailma (“Brave New World”) and it’s now scheduled for release by Svart Records on November 23. The cover art by Maahy Abdul Muhsin is a real eye-catcher — it’s right after the jump. 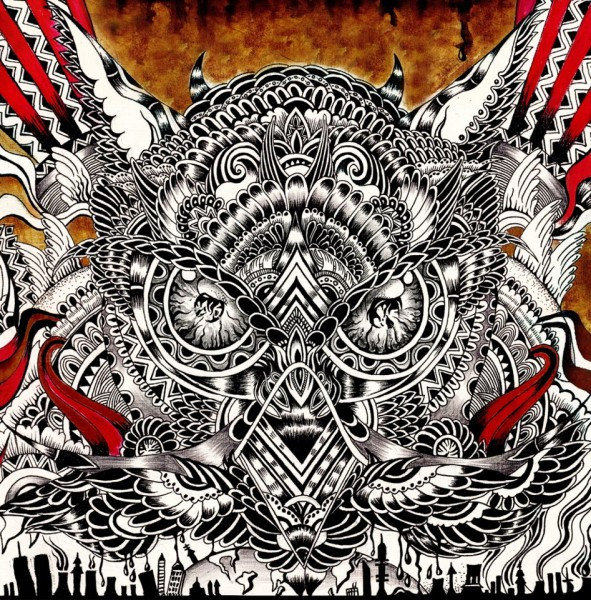 Today, the band released a music video for a track named “Minä elän”, which means “I live”, if Google Translate is to be trusted. It was directed by Sami Jämsen, who may or may not be the same Sami Jämsen who is the guitarist for a killer band named Survivors Zero. The atmosphere undoubtedly has something to do with it, but the video makes snails seem like emissaries of Cthulhu.

The song is a stripped-down, hook-filled, doom-metal crusher with a dark, keyboard-enhanced melody. Mikko Kotamäki sticks with wholly harsh vocals on this track, though it’s a mix of raspiness (which gives the song a “blackened” air) and his familiar roaring. Good stuff.  Headbang to this and leave reactions in the comments.

I discovered this long-running French band only through their last album, XI Reasons To See (2010). That album was a bit of a stylistic mix, but I thought it was a real powerhouse assault. Lifeforce Records is now set to release the band’s 8th album, Resolve In Crimson, on November 19 in Europe and a day later in North America. As you can see, the cover art by Strychneen Studio is killer.

Today, the band debuted the first song from the album, “Aiming A Fist In Enmity”, and it sure sent a high-voltage charge through my head. It’s a highly infectious, thrash-paced blast of melodic death metal that sounds huge and hits hard.

I would add that sample clips from all the songs on the album are now streaming at the following location:

So if the YouTube clip below appeals to you, check out the balance of Resolve In Crimson. Looks like the whole album will become available for digital download at that same location on November 16.