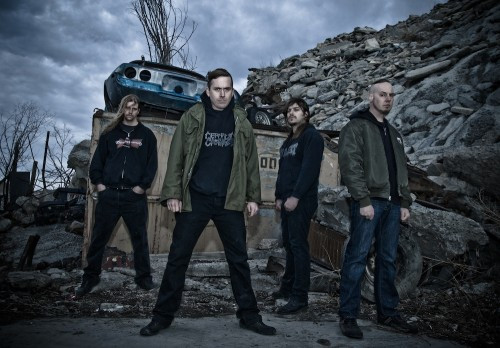 “WARNING: The video you are about to watch is incredibly gory, violent, and features strong sexual violence including rape and sexual assault. Bloody-Disgusting does not endorse or condone any of the actions seen in this video. It is to be viewed as entertainment only.”

That’s the warning that appeared in advance of Bloody Disgusting’s premiere not long ago for the new official video by Cattle Decapitation for “Forced Gender Reassignment”, a track off their decimating 2012 album Monolith of Inhumanity. And that warning appeared after the site explained that the video had been rejected by both YouTube and Vimeo.

I took all this with a grain of salt. I mean, let’s face it, we live in a culture totally stuffed with hype, because hyperbole sells. Having now watched the video, I’m here to tell you: The warning is not hype. Mitch Massie has made something utterly foul and disturbing, with explicit scenes of torture and rape and the brutalization of human flesh. It’s so NSFW that you’re probably not even safe watching it in the same city where you work.

In theory, there was apparently a point to be made by this video, one connected to the lyrics. According to a press release, “‘Forced Gender Reassignment’ is a gory, obscenely graphic and explicitly intense story of what could happen when the tables are turned on a group of people whose faith blinds them to the point of being unable to mind their own business and just letting others be themselves.”

Cattle Decap’s idea of turning the tables apparently is to fantasize about taking people whose offense consists of rancid public expressions of ignorant bigotry and subjecting them to the most awful forms of degradation and butchery.

I don’t take this kind of shit too seriously — I mean, it’s a fuckin’ metal video, ain’t it? Still, I really don’t find this to be entertainment, and I think it’s ridiculous to claim this draws useful attention to some kind of symbolic point by being outrageous — which is what Travis Ryan seems to be saying in his quoted statement about the video: “It seems nowadays you have to be over the top in your presentation to get anyone to think about anything anymore.”

The only thought I’m having at the moment is whether I’ll recover my appetite by dinnertime.

HERE is the link to the video.  You’ve been warned.