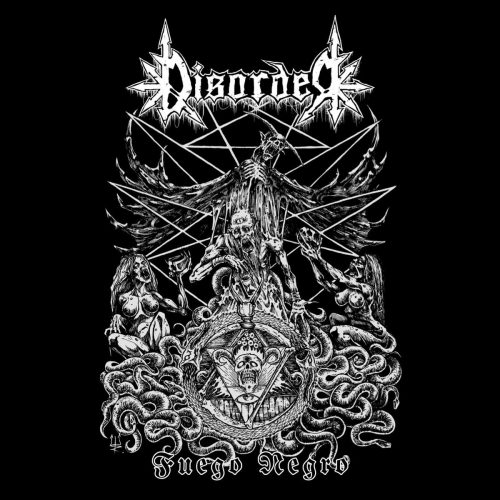 Disorder from El Salvador began the first stirrings of life in the mid-90s as its principal creator Jorge Montesino (M.Q.) began recording songs with an acoustic guitar on his tape recorder at home. The first demo was released in 2001, and the first album the next year. More than 10 years passed before Disorder‘s second album was released (by El Salvador’s Morbid Skull Records), and now the band’s third album is primed for release on April 21 by Symbol of Domination Productions (Belarus) and Morbid Skull. The album’s name is Fuego Negro, and today we premiere a song from the album called “Existencias Paralelas“.

This is the kind of music that ought to appeal mightily to thrash purists. It doesn’t aim to push the boundaries by incorporating progressive flourishes or throwing other genre styles into a blender. But it’s fast, it’s aggressive, and it delivers a big adrenaline surge — and if you like your vocals raw and vicious, Disorder satisfies those tastes as well (the album features guests on vocals and lead guitar, in addition to the talents of the band’s two main members). END_OF_DOCUMENT_TOKEN_TO_BE_REPLACED