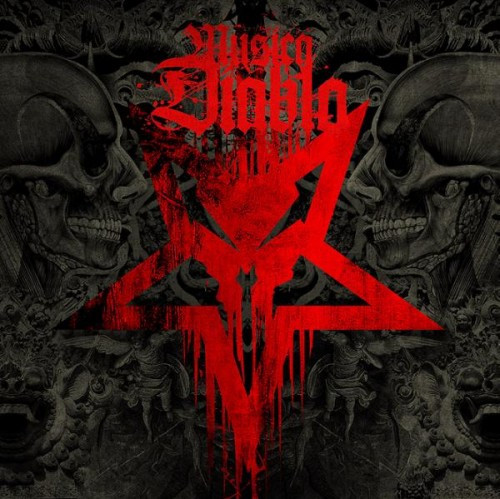 Musica Diablo is a relatively new band based in São Paulo, Brazil, with a self-titled debut album due for release on May 28. Three things grabbed our attention. First, the band’s vocalist is Derrick Green, who’s been the frontman for Sepultura since 1997.  Second, the band describes its music as “extreme fast thrash metal, with with the characteristic Brazilian style and a strong root into the 80’s veteran veterans.” Third, the forthcoming album features a cool cover (above) by Gustavo Sazes, who has also done album art for Arch Enemy, God Forbid, and Old Man’s Child.

That was enough to draw our attention to the music. We’ve been listening, and let’s just say it will kick your ass all the way up to your shoulder-blades. The music is blistering in its intensity and speed and features some cool dueling guitar solos — and Derrick Green’s raspy howls and guttural growls are skull-scrapingly vicious.

Musica Diablo was started by guitarist Andre NM (of Brazilian hardcore band Nitrominds) in early 2008, and the rest of the line-up consists of drummer Edu Nicollini (also of Nitrominds),  second guitarist André Curci (Korzus, Threat), and bassist Ricardo Brigas.  The band’s new album is currently streaming in its entirety at a Brazilian internet site called Radio UOL, which you can find at this location.

But you don’t have to go there just yet, because after the jump, we’ve got a widget that will allow you to listen to five of the album’s 11 songs right here at the NCS site. Seriously, you owe it to yourself to check this shit out.  (more after the jump .  .  .) END_OF_DOCUMENT_TOKEN_TO_BE_REPLACED