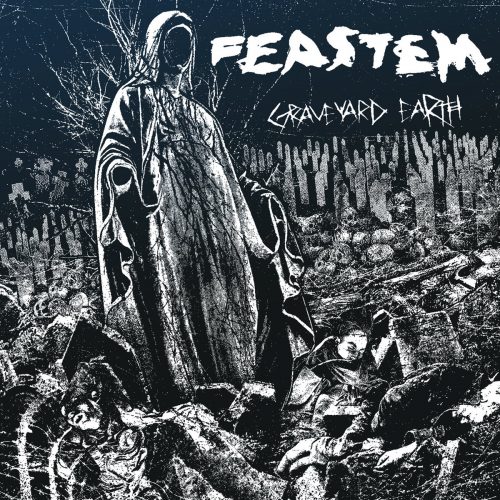 (As part of his effort to circle back to earlier parts of the year and catch up on stuff we missed, DGR has a good time reviewing the nuclear shockwave of an album released in March by Finland’s Feastem.)

It’s tempting to write short reviews for grind albums, in part because in the time it takes to hammer out some words about them there’s a distinct possibility that you could loop around the whole disc four-to-five times. Feastem’s Graveyard Earth is no different in that regard: Released in March to close off a close-to-seven-year gap between full lengths, Graveyard Earth clocks in at a little under twenty minutes of drum kit battering and shrieking violence.

Grind albums trend toward being quick expulsions of auditory violence and Graveyard Earth is very comfortably nested in that musical family tree. It is – understandably – seething and mean, with a whole range of targets serving as musical clay pigeons for Finland’s Feastem to knock out of the sky, with only one song clearing the two-minute mark.

Feastem move fast and Graveyard Earth will likely toss its fair share of people to the side, and honestly, Graveyard Earth is easily one of those albums better suited for a specific mood. But if you need all-consuming blasts and guitar work that could power you through even the slowest of events, then Graveyard Earth is fantastic.

Especially the way everything hits after the opening bass guitar dirge in the title song, my goodness. END_OF_DOCUMENT_TOKEN_TO_BE_REPLACED