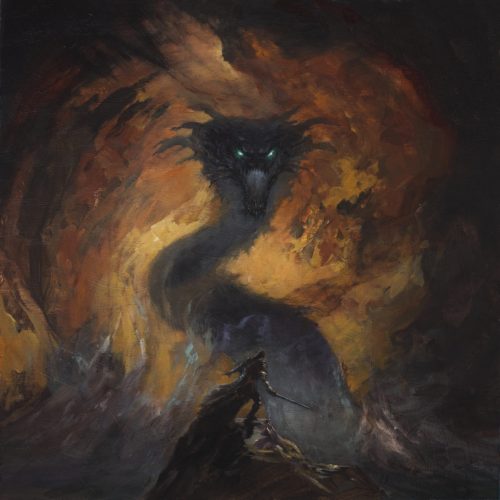 To be honest, I’d seize on just about any excuse to plaster Adam Burke’s stunning artwork for Firebreather’s self-titled debut album on our page again. It was his art that first drew me into the music of this Gothenburg trio, and their heavy-as-hell brand of sludge and doom kept me rooted in place as I listened to the album’s first single (“The Ice Lord“) early last month. Now I find myself in the fortunate position of bringing you the premiere of another track — “Fire Foretold” — in advance of the album’s October 13 release by Suicide Records.

You gotta love guitarist/vocalist Mattias Nööjd’s introduction of the song:

“‘Fire Foretold’ is straight-up a song about this warrior who grabs his big fucking sword and rides out into battle, slaying everything and anything in his path. The lyric, ‘The raging wolf’s head, hangs at my side / I took the red glow, I took the roar’? That’s how badass he is. This is the opening track and it’s setting the tone for the album, it’ll take you to dark and violent places.”

I ask you, who doesn’t love a song about a big fucking sword (and the sorcery of a raging wolf’s head)? I mean, other than the person on the receiving end of it? END_OF_DOCUMENT_TOKEN_TO_BE_REPLACED

On most days I post a piece of usually dark or surreal artwork on our Facebook page. I keep an archive of what I’ve posted over the years, as a way of trying to avoid repeating myself. In that archive I’ve counted 22 paintings by the Polish artist Mariusz Lewandowski that I’ve posted over the years since I began doing that, which I think is proof of how strongly I like his creations. But as far as I can recall, he has never created artwork for the cover of a metal album… until now. And his cover for the new Bell Witch album will surely stand as one of the best album covers of the year, if not THE best. END_OF_DOCUMENT_TOKEN_TO_BE_REPLACED