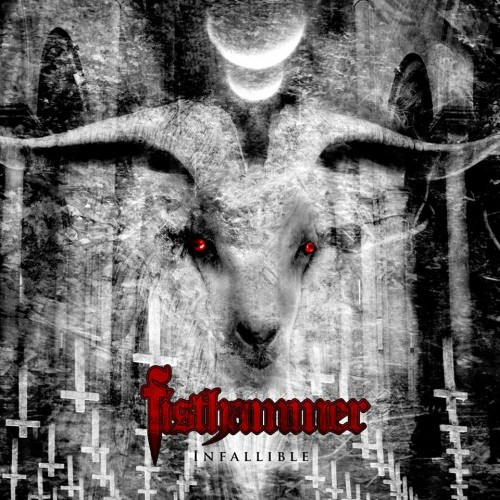 (In this post TheMadIsraeli enthusiastically reviews the new, second album by Pennsylvania’s Fisthammer.)

Now this is some no fucking mercy shit right here.  Fisthammer (dat name) play some no-nonsense, frigid, piercing, putrid death metal.  Calling to mind Carcass, Dying Fetus, Misery Index, Hate Eternal, Immolation, some old At the Gates, and Origin, their sophomore album Infallible is indeed, for lack of a better term, infallible.  This Downingtown, PA threesome are a death metal titan to be reckoned with.  Summoning all that is sinister and alien, Fisthammer’s sound is that of third-world torture, absolute fucking carnage laid bare with explosive fury.  The riffs are tasty, the vocals putrid and waste-covered, the drumming unrelenting, technical and filled with detail.  Combine this with progressive tendencies, and Infallible may find itself as a first candidate for defining albums of 2014.

The first bit of physical abuse comes in the rather proggy opener “Arithmos Tou Therou”.  Eerie chords, tremolo-picked on classical guitars, ring in, before the introduction of a riff that sounds like a funeral procession.  The drawn-out intro sets the tone perfectly, before Fisthammer assault you with a blistering volley of tremolo-picked guitar interplay.  The guitar work is pronounced yet intricate and shows an insane level of sophistication.  Guitarist and vocalist Max Svalgard has the gift of the riff, on top of his bestial roars from hell itself, driving the music. END_OF_DOCUMENT_TOKEN_TO_BE_REPLACED