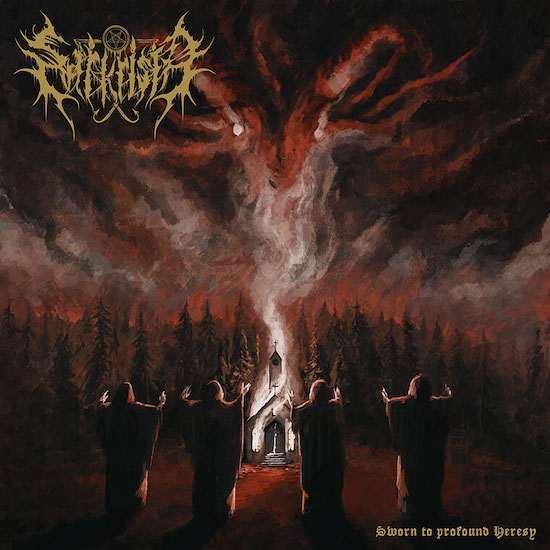 The first song in today’s collection, “The Beast Reborn“, is a teaser for the third album to be released by these Finnish Satanists (who dwell in Germany). It rips and ravages, batters and scampers, but soars in a way that’s both glorious and desperately beleaguered, and the trilling leads channel a heart-felt yearning that might seem at odds with the completely unhinged, flamethrowing vocals. END_OF_DOCUMENT_TOKEN_TO_BE_REPLACED

(We welcome Jay Lawrence to the pages of our putrid blog. He is a self-described long-time metal nerd from Philadelphia with a specific penchant for black metal. He likes both cats and dogs, couldn’t care less about the Eagles or Phillies, and doesn’t want to hear about your experiences with cheesesteaks. He shares with us his review of the wonderful new album by Scotland’s Fuath.)

Look at that cover artwork. Could anything be more fitting for a winter release?

I suppose I’ll begin by telling you what you’ll all be able to find out when this band and album eventually get added to Metal Archives: Fuath is a Scots Gaelic word meaning hatred, which is an interesting choice in my opinion, but more on that later. Fuath is also the latest endeavor from the Scotsman Andy Marshall, well-known previously within our community for his work with Saor, formerly Àrsaidh, — direct, if far more mature descendants of Andy’s early project, Askival, and all of those projects being black metal of an epic, Celtic folk-influenced nature. This is not true of Fuath, which certainly explains an entirely new brand being created under which to release this album. END_OF_DOCUMENT_TOKEN_TO_BE_REPLACED

If you know about the Scottish band Saor, then you know the name Andy Marshall. (And if you don’t know about Saor, self-administer some form of harsh penance and then go listen to Aura and Roots without further dawdling.) As he has already proven with Saor, Mr. Marshall is a very talented musician. Like many talented artists, his creativity isn’t fixed within rigid boundaries — as you’re about to discover.

On February 1, Neuropa Records will release the debut album of Fuath, a new black metal project that Andy Marshall created to express other musical interests. The album bears the simple title “I“. As Andy explains:

“I wanted to create a cold, hypnotic and melancholic black metal album which tried to capture the feelings I felt listening to these bands. I always come back to these types of bands when winter comes along and I feel their sounds are perfect for this time of year, almost kind of spiritual in a way.”