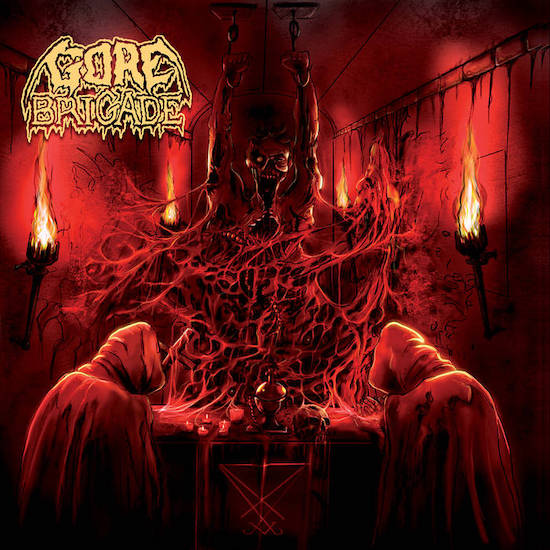 The three veteran Swedish musicians whose music is the subject of the following premiere proclaim their love for blood spatter and horror in the very name they chose for their collective enterprise: Gore Brigade. And of course it’s death metal they chose for the audio expression of their deviant adorations, a natural expression given the other bands on the resumes of this trio, who are: Guitarist Ludvig Johansson (Defiatory), drummer Jon Skäre (Defiatory, Wachenfeldt), and vocalist/lyricist Jonny Pettersson (Wombbath, Massacre) (who coincidentally was the subject of an interview we published earlier today).

Well, but death metal is a big tent that houses manifold mutations of sound, so what stylistic ingredients go into the musical blood cravings of Gore Brigade? Those will be fully revealed on December 10th, when Redefining Darkness Records will cremate the desiccated corpse of this year by releasing Gore Brigade‘s self-titled six-track EP, but today we give you a twisted taste of what’s coming through our premiere of an EP track named “The Rot Becomes You“. END_OF_DOCUMENT_TOKEN_TO_BE_REPLACED