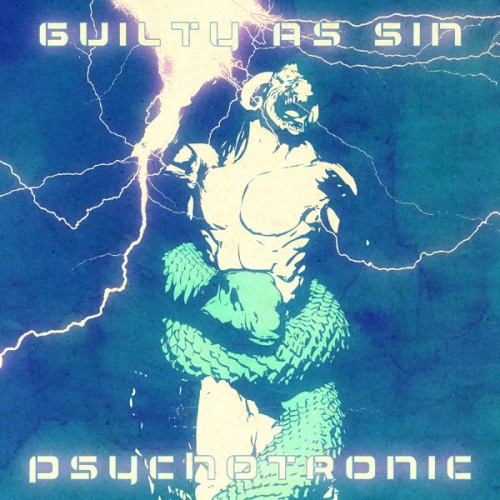 Guilty As Sin is a three-man band from the Boston area who were nice enough to send me a digipack CD of their latest album, 2011’s Psychotronic. This album is the band’s fourth, and I discovered that I already had on my iPod their last release, III, which came out in 2010. I’m pretty sure I didn’t get around to hearing that one, because I think I’d remember the band’s sound, now having listened to all of Psychotronic.

I originally picked this band as one of the listening experiments for yesterday’s MISCELLANY post, but instead of stopping at one or two songs, per the rules of that game, I got sucked into the whole album. If I’d included my impressions in that MISCELLANY post, it would have turned out even gargantuanly longer than it already was. So, I decided to include my thoughts about Psychotronic in this separate piece.

When I started into Psychotronic, I thought I’d just pick the first song on the album and have that be the basis for my MISCELLANY impression. That first track turned out to be a Moog-ish synthesizer piece that sounded like two scary electronic beings having a conversation. So, of course, I couldn’t stop with that. The next four songs flew by in a blaze of punk rhythms spliced with thrash mayhem and hardcore vocals. I liked that shit quite a bit, so I continued to listen — and then I hit a total surprise at the sixth track, “Addicted To Cyanide”. It’s a long instrumental propelled by chug-heavy riffage, thrash-guitar chords, and weaving/soaring solos that got my addled head whipping. It’s a guitar lover’s head-trip.

Well, fuck, I really couldn’t stop with that. What would come next?  (more after the jump . . .) END_OF_DOCUMENT_TOKEN_TO_BE_REPLACED