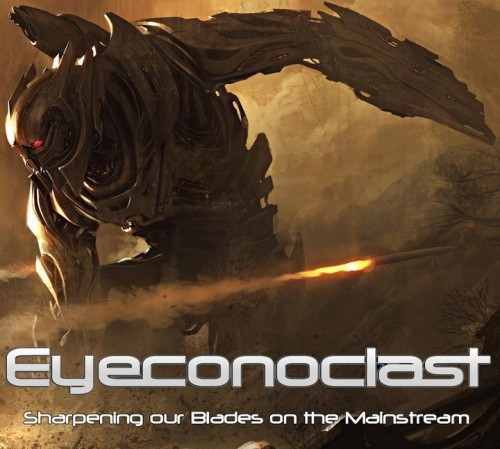 To recap the rules of this MISCELLANY game for NCS newcomers: When bands or labels write us, or we get reader recommendations, or we see news blurbs about bands who look interesting, we put the band names on a list. We limit this list to bands whose music we’ve never heard, and the majority of the listed bands are unsigned. At irregular intervals, when I’ve got time, I randomly pick a few names from the list and listen to one or two of their songs, and then I write my impressions for this MISCELLANY series. Plus, I make it possible for you to hear what I heard (or saw, if it’s a video).

This exercise is different from our reviews, which we almost always limit to music we want to recommend. For this exercise, like Forrest Gump’s box of chocolates, we don’t know what we’re going to get. It may or may not taste delicious. But the surprise factor is part of the fun (at least for me). For today’s post, the bands I picked were Eyeconoclast (Italy), Under Eden (US), and Heidevolk (The Netherlands). I actually picked a fourth band, too, but I’m discussing them separately, to keep this thing from growing even longer than it already is.

I’ll go ahead and confess right up front: I cheated on the MISCELLANY rules for all three bands, because their music turned out to be too interesting to assess with just one song. Yes, I even cheated on the last one, too, though it’s not the kind of music I typically embrace. All that cheating means there’s a lot of music coming your way after the jump, but none of you has a real life, do you? Of course not, so you have plenty of time to listen. 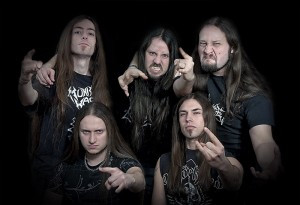 I learned about this Italian band via an e-mail from its bass player Paolo “Urizen” Ballarotto, who asked us to check out their new EP, Sharpening Our Blades On the Mainstream.

The band had its inception in 2003, and over its history has shared connections with two other Roman behemoths who are among our favorite current metal bands — Fleshgod Apocalpse and Hour of Penance. Cristiano Trionfera of FA was at one time a guitarist for the band, and HoP guitarist Giulio Moschini played bass on Eyeconoclast’s debut album, Unassigned Death Chapter (2008). In addition, former HoP percussionist, the inhumanly good Mauro Mercurio, has been Eyeconoclast’s drummer since 2005.

As a result of further line-up changes following the band’s release of their debut album, the line-up who recorded the EP consists of bassist Ballarotto (formerly with the excellent Italian black metal band Malfeitor), session vocalist Carlos “Snyder” Mastantuono, guitarists Alessio Cosenza and Stefano Morabito (who is also a very talented record producer with his 16th Cellar Studios), and Mercurio on drums. One more change has followed since the EP was recorded, with the band being joined by Filippo Palma as its permanent vocalist.

Whew. That’s a lot of history, but I thought it was worth relating, because all those august pedigrees sure got my attention. But enough of that — onward to the music. As I said before, I cheated and listened to all three songs on the EP, and I’ll give you fair warning: You’d better duck and cover, because this is a roaring fire of blazing death-thrash.

My mind may be playing tricks on me, since I had FA and HoP in my head as I started listening, but I found similarities, particularly in the high-octane speed, the technical riffing, and the convulsive, slamming rhythms. This is more thrash-heavy in its instrumental styling than the music of those other bands, and the higher-ranging vocals are also closer to modern thrash than to death metal. Stylistic nuances aside, listening to Sharpening our Blades On the Mainstream is one hell of an adrenaline-charged rush.

There’s not much reason to miss out on the experience, because you can download the new EP for free (with the band’s permission) via a link you’ll find at this location, and the band’s merch page can be found here, where CDs of the album and EP are on offer. And now here’s a player you can use to stream all 3 songs from the new EP, plus songs from the 2008 album. You can follow Eyeconoclast on facebook here 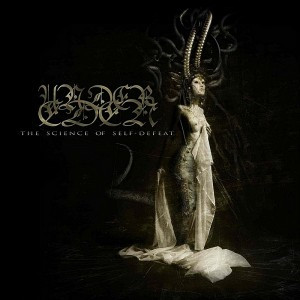 Well, I figured that whatever came after Eyeconoclast would be a let-down. What came next was a download of a new album (The Science of Self-Defeat) provided me by a band from Minneapolis, Minnesota, called Under Eden. Oh my fuck, not two rule-breakers in a row! But yes, I cheated massively on the MISCELLANY rules for this test, and you can guess why: Because this album blew me away.

In a post not long ago about Byzantine, NCS writer TheMadIsraeli asserted that the future of metal belongs to bands who successfully engage in a fusion of styles, and he gave Revocation and Fleshgod Apocalypse as current examples. I could add Under Eden as another example. They join together the weight and power of near-brutal death metal, the blistering fury of full-throttle thrash, the dark eviscerating buzz of black metal guitar, bursts of almost prog-metal soloing, and catchy melodies.

I suppose you could try to sum it up as an intersection of melodic death metal and black thrash, but I’m still not sure that quite captures what Under Eden are doing. From song to song, some elements are more dominant than others, which means that each song has an individual character, and moving through the album is like a road trip through a changing landscape.

The Science of Self-Defeat is the band’s second album, and the feeling of a dynamic musical journey isn’t accidental. This is a concept album that tells the tale of an alternate human history. The band recommends that the album be heard from start to finish, and even though I intended only to sample a few songs for this MISCELLANY post, I couldn’t stop myself from doing just that.

At times, the band is in full-on attack mode, like a school of feeding piranha, all flashing teeth and boiling water and blood, lots of blood. At other times, soaring melodies lift the songs above the low-end pummeling and the gravel-throated growling, or head-spinning guitar solos flash across the music or weave through it, switching the mood from buoyant to melancholy. At still other times, the darkness and heft of the music increase, the growly vocals drop into an even deeper abyss, and you get something like a more melodic version of Behemoth. 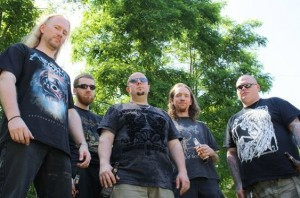 The band have been around since 2000, and the experience shows in the playing. There’s impressive talent at every station, but the two brothers who handle the guitars (Ryan and Christian McAtee) are particularly notable — dextrous, inventive, multi-faceted, and capable of flying.

I’ve picked two songs to share with you. I could have randomly picked any two and been happy with the choice, but I picked these to show some of the differences in stylistic emphasis from one song to the next. These are called “The Technocrat” and “Shadows Across Glass”.

You can buy a download of the album at this location, you can check out the band’s official web page via this link (which includes a page with free song downloads), and you can start following Under Eden on facebook here. They must be new to FB with less than 100 likes — so help them boost that total, and then spread the word and keep your eyes on these dudes. 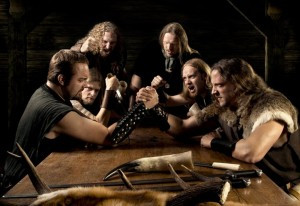 I added this Dutch band to the MISCELLANY list through a recommendation from NCS reader Trollfiend. Trollfiend has multi-faceted tastes, but they include a weakness for folk metal (the last of his recommendations we featured was Russian pagan/folk band Arkona). One look at Heidevolk told me that their music was likely to fall within the same genre. You know, with all the animal skins, I figured it wasn’t going to be deathcore.

Heidevolk turns out to be a well-established band, signed to Napalm Records with three albums to their credit and one more scheduled for completion in 2012. The most recent album is 2010’s Uit Oude Grond (“From Old Ground”). The album cover offered another clue to the musical style: 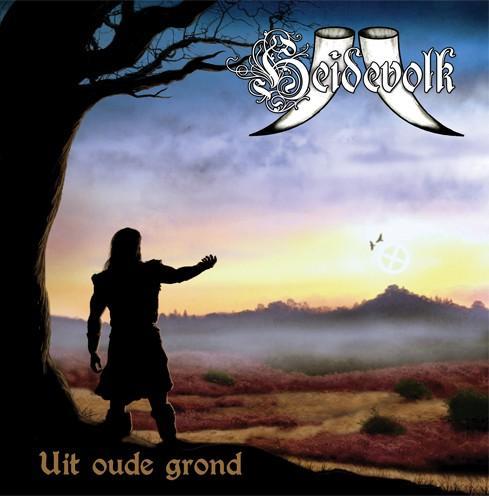 Following up on Trollfiend’s request, I found an official music video for the first track on the most recent album, which is called “Nehalennia”. Initially, I had a bit of trouble getting past the clean singing from the band’s two vocalists, though at least they’re both baritones and they look like they could handle a battle-ax in a dust-up if need be. But I admit that it didn’t take long before I wanted to yell out “VOORWAARTS!” (forward!) right along with them in the supremely catchy chorus. The song also includes an irresistible headbanger’s riff and an electric violin solo that I liked. Check it out:

Yes, I cheated on this one, too, and listened to the second track on the album, “Ostara”. This one doesn’t have the swing of “Nehalennia”. It’s more of a stomping march with a black/pagan air, courtesy of a vibrant tremolo guitar buzz and blast-beat drumming. Once again, I got hooked by the main riffs in the song, and once again I wished for some harsh vocals. And once again, I’ll let you make up your own minds:

Heidevolk has an official site you can access via this link, and it includes free song downloads behind the “Media” tab. You can also get more info at their facebook page.

That’s it for this edition of MISCELLANY. Let me know what you thought of today’s music in the Comments, and please do enjoy the rest of your fucking day.

30 Responses to “MISCELLANY NO. 34: EYECONOCLAST, UNDER EDEN, AND HEIDEVOLK”