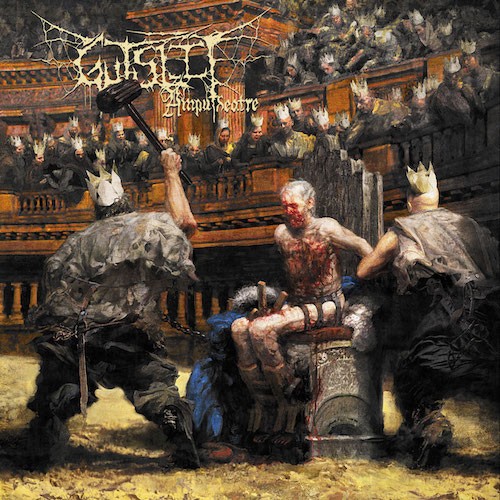 I’ve written before, and I don’t think many people would argue the point, that many excellent metal bands located outside North America and Western Europe would probably be household names (at least within the filthy households of metal) if they lived in the West. It’s not so much a matter of regional prejudice (though undoubtedly there’s some of that at work) as it is a challenge to gaining exposure. You can add India’s Gutslit to that list of deserving but under-appreciated bands. Though their success in arranging two European tours (with a third one in progress now) has undoubtedly helped their cause, I suspect their new album Amputheatre is going to elevate their profile significantly, notwithstanding the challenges posed by being located outside the West.

Amputheatre is the band’s second album, which follows their debut full-length Skewered In the Sewer by four years. It’s scheduled for release on October 15 by Transcending Obscurity India, and it’s going to catch a lot of eyes based on the cover art alone, which was painted by the phenomenal Berlin artist Eliran Kantor, who has a long list of credits on his resume, including album art for the likes of Incantation, Hate Eternal, Fleshgod Apocalypse, Testament, and Archspire. And the music’s going to catch a lot of ears, too. It certainly caught ours — and then proceeded to wreck them. We’re very happy to host a premiere of a song from the new album called “Necktie Party“. END_OF_DOCUMENT_TOKEN_TO_BE_REPLACED