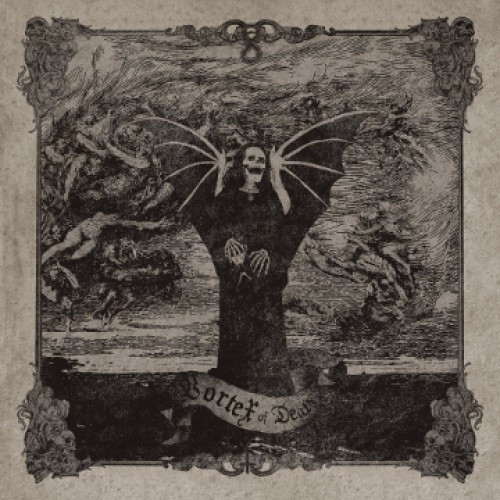 (This is the third installment in this week’s run of brief album reviews – or at least brief by our usual standards.)

Five days ago we posted a review of a forthcoming album by a long-running Polish death metal band called Hate. At roughly the same time as we were listening to that album, we were also listening to a new album by a band called Hat, which is the Norwegian word for . . . wait for it . . . hate. Actually, it’s the word for hatred, but close enough. So, you could say it was a hate-filled week at NCS, except what we’re feeling for the music of Hat is far from hatred.

The Norwegian word hat is pronounced like the English word “hot”, and that’s a good word for Hat’s forthcoming album, Vortex of Death: It’s hot. That is, if you like your black metal extremely old school and chilled down to the temperature of liquid nitrogen.

Hat is a two-man horde originally formed in 1993 by Nevresch and Undertrykker under the name Ravner. They were inactive from 1996 to 2006, and then reunited under that Norwegian name for hatred. They released a demo in 2008 called Livet Ebber ut (“life ebbs away”) and then a debut record in 2009 called The Demise of Mankind. Perhaps you’re beginning to get the sense that in the world of Hat, there is no sweetness and light. But the album has hooked us, and one unusual song in particular.  (more after the jump, including a track . . .) END_OF_DOCUMENT_TOKEN_TO_BE_REPLACED