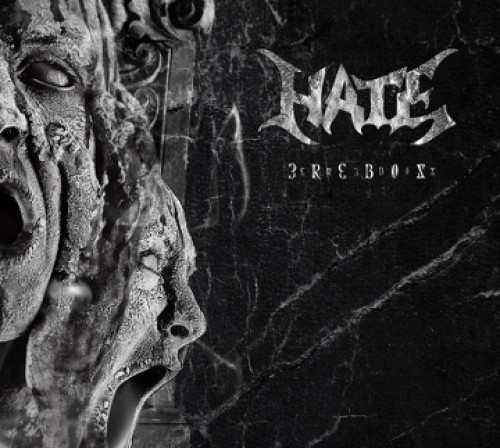 It’s January, not December, so many months will pass before we turn again to compiling a list of the year’s most infectious extreme metal songs. But if we were to do it now, ten songs on the list would come from Hate‘s new album, Erebos. It’s death metal heroin, a charged syringe of addiction, a heatseeking missile headed for the hottest part of your brain.

Hexen can flat-out fly on the drums, creating an aura of chaos without losing control, rumbling and rocking, inflicting the blasts and the double-bass at just the right moments, jolting you hard as he marks the time signatures.

Adam the First Sinner and Destroyer are galvanizing guitarists — dextrous, fiery, capable of generating a variety of tones with a variety of techniques, applying hacksaws to your spine, triggering helpless convulsions, swarming, swirling, sawing, whining, but never veering far from a foundation of industrial-strength hammering.

Mortifer‘s playing is taut and icy, his bass running underneath in a rumbling thrum and then syncing up with the guitar rhythms to infect those quasi-industrial riffs that won’t let you stay still.  (more after the jump, including a track . . .) 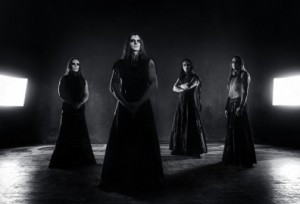 And ATF Sinner knows how to engulf you in throaty growls, vibrantly expressive, impassioned, interesting, of a piece with all the imminent threat in the music.

All that professionalism and energy, the product of 20 years, more or less, of playing — what powerful tools, but are they wielded for good or for evil? No doubt about the answer — it’s all evil, and it’s all irresistible.

At least on the global stage, Hate have dwelled somewhat in the shadow of their massively popular Polish countrymen, Behemoth. As purveyors of blackened death from Poland with some vocal similarities and a similar fashion sense, perhaps the comparison is unavoidable. We think Hate holds their own very well on that comparison, thank you very much.

As we made our way through Erebos, it was one head-snapping marvel after another. We kept waiting for a fall-off, for something that, although good, might not light a fuse. Never happened. After an intriguing acoustic guitar intro called “Genesis”, the convulsing started immediately with “Lux Aeterna” and continued right through to the massive repeating riffs in the 10th song, “Luminous Horizon”, with some tempo jigs and jags along the way and a near-perpetual drenching of dark melody. All of it, death-metal sweetness, if not light.

Erebos is Hate’s seventh album, and now our favorite. Syncopated, super-charged, sinister — modern death metal just doesn’t get much better than this. If you’re looking for some professional-grade groove with your DM venom, this is a fucking good start to your year. Taste this, and don’t spare your eardrums — push the volume. But be forewarned, you may become compelled to consume the whole album.

Erebos is out in Europe and will debut in North America on February 22 on Listenable Records. You can pre-order here.

Maybe by the end of this year there will only be five of these songs on our most-infectious list.

UPDATE: We just remembered this very nice bit of info: In April and May, Hate will be touring NorthAm with a stupendous lineup of other bands, headlined by SEPULTURA with additional support from BELPHEGOR, KEEP OF KALESSIN, NEURAXIS, and BONDED BY BLOOD. Starting May 23, Seattle’s own NEVERMORE will replace BELPHEGOR to finish out the tour. Here are the dates and places:

With Belphegor, Hate, Keep Of Kalessin, Neuraxis and Bonded By Blood:

With Nevermore, Hate, Keep Of Kalessin, Neuraxis and Bonded By Blood: