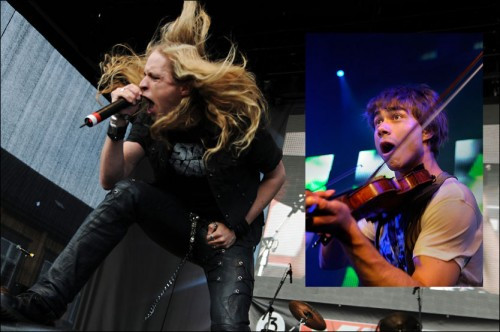 I had way too much fun last night. This morning, I feel like I’m being punished in a circle of Hell far worse than anything Dante imagined in The Inferno. But despite a hangover of galactic proportions, I’ve got something for you. Two somethings, actually. They served as a reminder that no matter how much I want to kill myself today, there are reasons to Keep . . . Living.

When we rolled out our list of 2010’s most infectious extreme metal songs, Part 2 of the series paired up songs from two of our favorite bands, Keep of Kalessin and Living Sacrifice. By coincidence, yesterday I saw two brand new performance videos that feature both bands, and they’re both good.

Last year, Keep of Kalessin made their debut in the Eurovision contest, riding the song “Dragontower” to a third-place finish in the Norwegian finals.  Even though “Dragontower” was the most accessible song on Reptilian, KoK’s third-place finish in the national contest was further proof that Norway and the U.S. are so different that they might not really be co-existing in the same universe.

But yesterday, there was more proof. KoK made a guest appearance on the nationally televised semifinal round of the 2011 Norwegian Eurovision song contest, performing another song from Reptilian — in a duet with Alexander Rybak. I tried to think of a U.S. parallel, and the first thing that popped into my head was Immolation showing up on American Idol to perform with Justin Bieber.  (more after the jump . . .)

Rybak is a singer-composer-violinist-pianist-actor who won the International Eurovision Song Contest finals in Moscow in 2009.  Representing Norway, he achieved the highest point total any country has achieved in the history of the Eurovision contest. It appears he has been a big fan of Keep of Kalessin, and wanted to perform with them. And yesterday, he got his wish.

So, here’s a video of Keep Of Kalessin performing “The DIvine Land” along with Alexander Rybak at the Norwegian Eurovision context last night (January 15, 2011). (KoK has released a 2011 version of the song on iTunes — but unfortunately it appears, so far, that it’s only available on the version of iTunes available to Norwegian consumers.)

We’re huge fans of Living Sacrifice here at NCS. What jump-started our fandom was watching them play a live set in their 2008 revival tour with Demon Hunter. They just kicked all kinds of ass and completely stole the spotlight from Demon Hunter.

Now, the band is going to begin dribbling out professionally filmed live performance videos from the touring they did in 2010. The first one is footage of them performing “Bloodwork” in their hometown of Little Rock, Arkansas, on December 12. This is a heavy fucking song performed by some genuine originals. The video looks very cool, too.

That’s all I’ve got.  I’m now going to crawl under a rock and resume my whimpering.