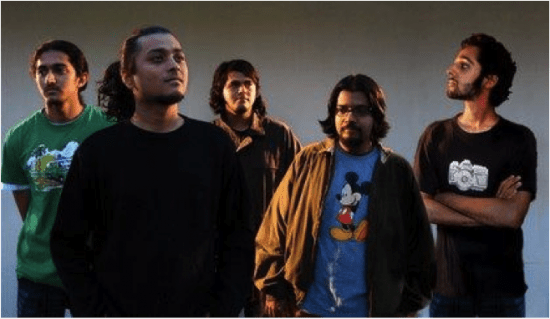 EDITOR’S NOTE: We’ve been hearing the name Scribe repeatedly since we started exploring Indian metal last year, so we asked our contributor from India, Siddharth Darbha, if he would give us an introduction to the band and its discography — and he obliged, with the following post.

Scribe is a box full of fun-filled pink chocolate confetti hiding a venomous snake beneath its contents. Yeah, that’s what Scribe is.

One of the most original bands found in this era, Scribe is not just two guitars, a bass, a throat, a drum kit and five pseudo-humans. No, definitely not Scribe. A concoction of auditory mutilations, pseudo glitter-infected personae and temporal hallucinations; that’s more like what Scribe has meant to the Indian crowd since its debut offering Have Hard. Will Core., which came out in 2005. A super-group of sorts, they took the nation hostage, winning quite a few national competitions and audiences all around.

Sounding like a not-so-distant progeny of SikTh, The Dillinger Escape Plan, and other mind-enhancing drugs, they incorporate a wide variety of genres into their play. As their debut EP suggests, hardcore is one of them. Frequently setting up djent tones, they also use electronic music. Time signatures fly here and there, but that is not what Scribe is about. Like the music of SikTh, the songs often feel like they are a part of something larger.   (more after the jump, including music . . .) 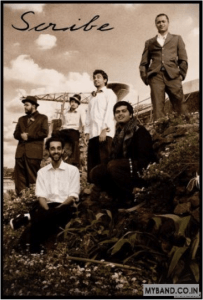 The band’s lyrical themes, just like their music, are quite abstract. Often toying around with word play, they are also known for their wacky titles, spanning even languages like Hindi and Marathi, grinding in the slang. “Ate A Banana”’s intro scream, “Bhaktavar!”, is one of the most popular of lyrics amongst their fans.

They swept the Rolling Stone Metal Awards 2010, winning the critic’s award for Best Vocalist, Album (Mark Of Teja), Song (“DemonPra”), and Band, and getting numerous other nominations. They recently received nominations for Best Band, Album, (Mark Of Teja), Song (“1234 Dracula”), Guitarist Of The Year (Akshay), and Bassist Of The Year at the Jack Daniels Rock Awards. They also recently played Norway’s Inferno festival, and in the past opened for Lamb of God, Sahg, Freak Kitchen and Satyricon.

In Scribe’s music, oddly timed riffs by Prashant Shah and Akshay Rajpurohit are complemented by quickly delivered verses from Vishwesh Krishnamoorthy, and are interspersed by beautiful clean pieces with nice interlaying guitarwork and even the occasional electronic ambiences. Scribe are unconfined in what they are ready to play. The drums as portrayed by Virendra G. Kaith (formerly Niraj) are not extraordinary, but aren’t lacking anywhere either. The bass lines as provided by Srinivas Sunderrajan are usually mixed a little deep in the mix, but occasionally pop in some wacky manner. 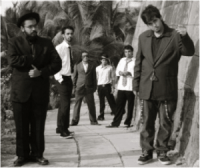 Scribe live is quite an experience. Are they tight? Yes. Are they tight whilst doing super funkymonkey crazy stuff on stage? Oh, boy, yes. On-stage mosh pits, mock cricket, stand-up comedy; it’s all a part of their set. And yet, they never compromise on their music, never failing to give an adrenaline-pumped set. The average gig has a very jovial aura with barely suppressed anger spurting up in phases. They are one of the best live acts India has produced. 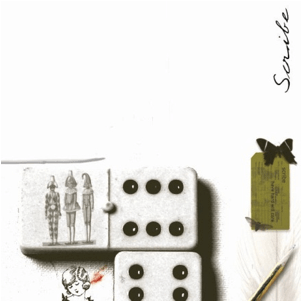 Have Hard. Will Core. was released in 2005. Accompanied by an animated video for the title “One Wing Pencil”, it contains four tracks. The sound was fresh and new, especially to the Indian market. Takers were a-plenty. Principally a core EP, one could also hear the effect of Prashant Shah’s riffing styles fresh from his side-project Exhumation (death metal). Though the humor quotient was already introduced, with constant mimickery and inhuman noises, Vishwesh’s vocals hadn’t expanded to the glory they would attain in their next offering Confect. 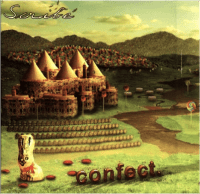 Confect was released in 2008. In an attempt to escape commercialism, the band gave away free CDs to fans at their gigs, whilst later putting it up for free download (at this location). It contains eleven tracks, including a cover of Scottish band Del Amitri’s “Roll To Me”. Personally, I would call this their best work. With plenty of electronic work accompanied by groovy riffs and vocal madness, this was a feather in their cap. 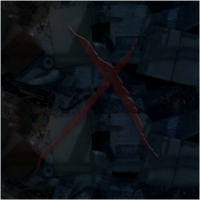 The much anticipated Mark Of Teja was released in May 2010 at the Summerstorm Festival, where Scribe opened for Lamb Of God. Its fourteen tracks span a large spectrum of genres. Painting a wild, yet beautiful soundscape, the album is a must-have. A video for “Dum Hai To Aage Aah” was released, which is worth seeing. As previously mentioned, Mark of Teja was named the Best Album of the year at Rolling Stones Metal Awards, and has also been nominated for Best Album at Jack Daniel’s Rock Awards.

If you like no-rules experimentation with seven strings and a motherfuckingly wild pair of lungs, then Scribe is a band worth checking out.

EDITOR’S NOTE: To give you a taste of Scribe, here’s that song that won the Rolling Stone 2010 critics’ award for Best Song, followed by the two videos that Siddharth mentioned in his post. The song, “DemonPra” is featured on a compilation of Indian metal and rock released for free download by Indian Rock MP3 to celebrate that site’s 2-year anniversary. The comp also includes tracks by Demonic Resurrection and Artillerie — two other Indian bands we’ve covered here at NCS. Go here to get that comp.