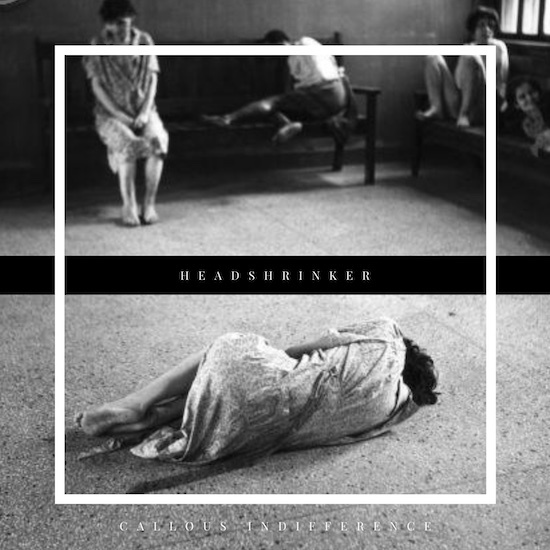 (Nathan Ferreira provides this introduction to our premiere of another track off the debut album by Headshrinker, with additional insights into the album as a whole.)

I had been sleeping on the promo materials for Callous Indifference waiting for me in my mailbox, not fully compelled to listen. The album art is subtle and understated, the band logo a plain font, and the “OSDM meets Death/Doom with mathy dissonance” descriptor used in the email title was kinda intriguing but also not unheard of either.

That they feature Havok’s drummer doesn’t move the needle for me (I’m not too familiar with them, and as such don’t know Pete Webber’s style), and I wasn’t acquainted with Polyptych, the more progressive black metal styled group the other three members previously played in. Because of the volume of promotional materials I sift through to find the golden riff nuggets, my brain can become fried by similar descriptors across emails, and Callous Indifference just happened to have surface aesthetics that got lost in the shuffle.

But then, head honcho Islander gave a premiere of “The Burn of Indifference”, first Headshrinker song released to the public. That article was just the push I needed to dive into this band further, and I am very thankful I did. (I was a fan and reader of this site well before I contributed to it, after all). END_OF_DOCUMENT_TOKEN_TO_BE_REPLACED

Almost exactly five years have passed since Chicago-based Polyptych released their third album, Defying the Metastasis. That album was a genre-bending head-spinner, an unconventional mix of death metal and black metal with progressive and technical elements woven within it. It made such a striking impact that we pleaded for a chance to premiere something from it (and our wish was granted).

While that band’s continued existence has been in question since then, it turns out that three of its members — Young Werther, Scott Skopec, and Frank Lato — have joined forces in a new Colorado-based group called Headshrinker, which also features the considerable talents of Havok drummer Pete Webber. Their debut album Callous Indifference is now set for release on August 27th, and once again we have the chance to host a song premiere. END_OF_DOCUMENT_TOKEN_TO_BE_REPLACED