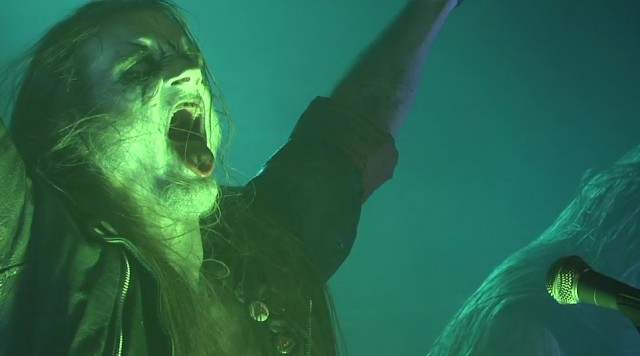 Norwegian black metal band Taake will be releasing their fifth full-length album, Noregs Vaapen, on November 1 in the U.S. on Dark Essence Records. It hit the streets in Europe on September 20, and we’re planning a review of it. It includes guest appearances by some signal names of the black metal elite, including Nocturno Culto (Darkthrone), Attila Csihar (Mayhem), Demonaz (Immortal), and Skagg (Gaahlskagg, Deathcult), as well as producer and Vulture Industries frontman Bjørnar E. Nilsen.

To begin whipping the faithful into a froth of anticipation for the album, today Taake premiered a music video for a track from the album called “Nordbundet” on the website of a Norwegian radio station called Pyro. The video is a mix of expertly filmed and edited live concert footage and scenes of the countryside around Taake’s hometown of Bergen filmed by Taake’s frontman Hoest — snow-covered firs and mountains, grey skies, isolated cabins, panoramas both beautiful and harsh.

The song itself is one I’ve had on repeat play this morning. It’s got a head-thumping, rock-style beat reminiscent of some of Darkthrone’s more recent efforts, charged with irresistible riffing. Near the end, it transitions into a blaze of memorable tremolo’d melody. And, of course, Hoest’s vocals are absolutely scalding. Very cool song, very cool video. Watch it after the jump (and prepare to headbang). END_OF_DOCUMENT_TOKEN_TO_BE_REPLACED