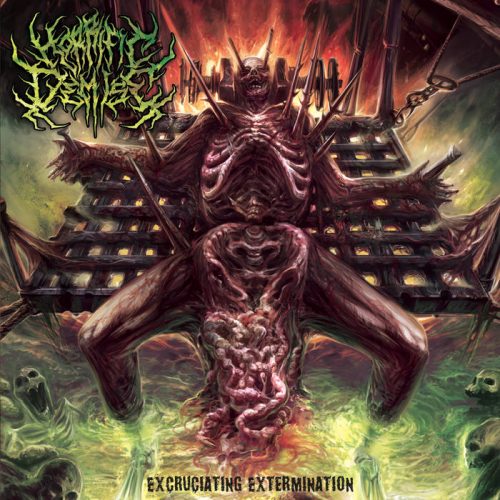 (Today Vonlughlio reviews the debut album of the U.S. death metal band Horrific Demise, which is out now on the Comatose Music label.)

The subject of today’s brief review is Excruciating Extermination, the first album by Horrific Demise, released via Comatose Music this past August 29th.  I believe this project was formed back in 2005 by Matt Bishop (Human Artifacts, ex-Lividity) and I heard of the name since he was working on this release for a couple of years. I was not familiar with this particular project, but was with his former band Lividity.

After time in developing the music he gathered some top musicians alongside him to record the album, including Anthony Voight on vocals (Sarcophagy, ex-Gorgasm),  Phil Good on bass (Lust for Decay, Necrotic Disgorgement), Tony Tipton on guitars (Sarcophagy, Regurgitaton, ex-Necrotic Disgorgement), and Kyle Christman on drums (Sarcophagy, Human Filleted, ex-Gorgasm). When I saw that lineup I thought, hot damn!!!! A great list of top musicians who have contributed to some amazing releases in the BDM world. END_OF_DOCUMENT_TOKEN_TO_BE_REPLACED