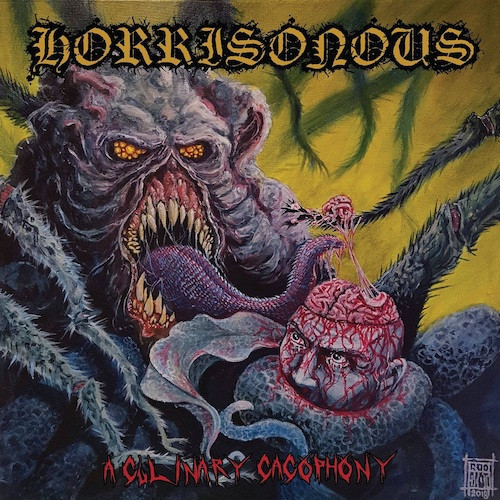 Gaze upon the grotesque, brain-eating monstrosity depicted in the cover art. Reflect upon the name of the album, A Culinary Cacophony, as well as some of the song titles — such amusing formulations as “Perpetual Mincing”, “Flesh Presented For Orgasmic Torment”, “Crispy Chunks of the Obese”, “The Number of the Feast”, and the delectable “Nourishment Through Excrement“, which is the track we’re presenting today.

It’s all so over-the-top that it might make you wonder just how serious Horrisonous are about what they’re doing, or conceivably might lead you to suspect that their music is some kind of gore-fetished brutal death metal.

So, let’s be clear: There is indeed a grotesque, macabre atmosphere to the brand of death metal that this Australian band have crafted, but the music is apocalyptically doomed, remorselessly destructive, and no joke at all. The fact that the line-up consists of current or former members of such bands as Temple Nightside, Backyard Mortuary, The Slow Death, Illimitable Dolor, and Pestilential Shadows might be enough to clue you in, but of course the best evidence is the music itself. END_OF_DOCUMENT_TOKEN_TO_BE_REPLACED