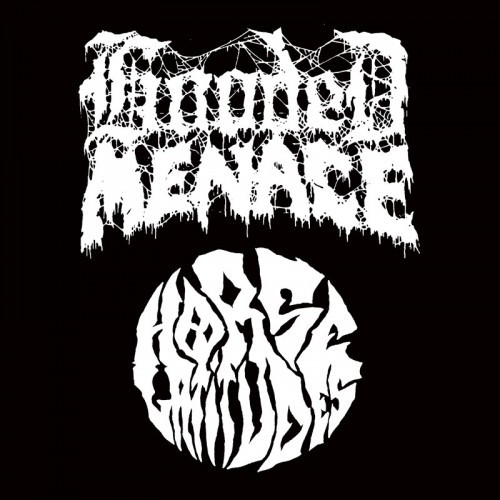 Among the current practitioners of death-laden doom metal, you’ll be hard-pressed to find two more catastrophic practitioners of the art than Finland’s Hooded Menace and Horse Latitudes. In January 2012, Doomentia Records released a 12″ vinyl split by the two bands, with each one contributing a song. Since January, Doomentia has gone through two limited pressings of 500 copies, and both are sold out, though it appears that copies may still be available through the bands’ online shops — Hooded Menace here and Horse Latitudes here.

Fortunately, you don’t have to scrounge around for one of the remaining copies of the vinyl edition to hear the music, because Doomentia has recently made the split available for streaming and digital download on Bandcamp.

As we previously reported, Hooded Menace also have a new album on the way via Relapse Records by the name of Effigies of Evil. It will be released on September 11 and can be pre-ordered in a variety of formats and bundles here. Today, Noisecreep premiered that album’s title track, which I strongly recommend you check out at this location.

But the main purpose of this post is to review and recommend the Hooded Menace / Horse Latitudes split. Though it consists of only two songs, it’s almost 19 minutes of music, because both songs are long-format offerings. Both songs are also lessons in how to make slow, extended, completely gut-crunching music without sending listeners into a coma. END_OF_DOCUMENT_TOKEN_TO_BE_REPLACED