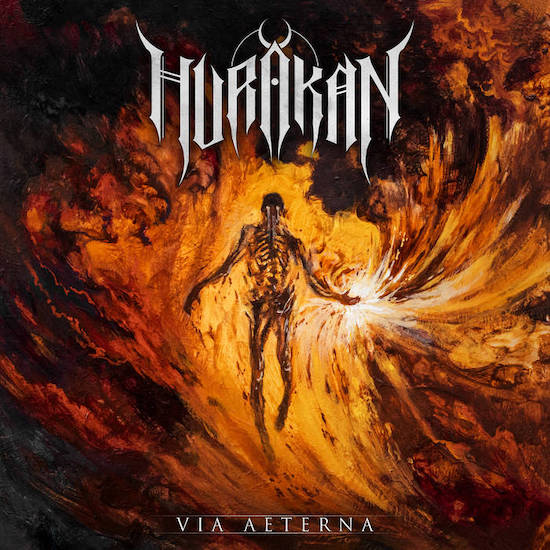 (On April 15th Lacerated Enemy Records released a new album by the French band Hurakan, and DGR has given it the following review.)

Confession: I find the times when a band becomes a completely different group within the span of a few years fascinating. As if a giant, historical brainwipe happened and the group essentially had to rebuild themselves from the ground up and the only thing that remained was the name. Now, the band must define themselves again and make the name fit the band, not the band fit the name, as if to justify moving into the name of the group like a crab upgrading its shell – or in this case, insectoid font logo for an image more sharp and pointy – for something else.

French bruisers Hurakan are still a young-ish group, as we’re still at the point where a debut release only having come out five years ago doesn’t seem like that long. Yet Hurakan find themselves in an interesting position with their latest release Via Aeterna, which landed on April 13th, 2022. Subject to a pretty sizeable lineup shift in the three years between the release of 2019’s Abomination of Aurokos and their newest album, Hurakan are a different beast.

You get the sense that with the mostly single-word song titles and the single-minded focus on a more deathcore-oriented form of brutality, the Hurakan that wrote a song called “Slamming Brutal Shit” and dropped it right before the end of a sci-fi maelstrom of brutal death style album may have their eyes focused elsewhere. The question that rises with Via Aeterna, then, is just where are the band looking? END_OF_DOCUMENT_TOKEN_TO_BE_REPLACED